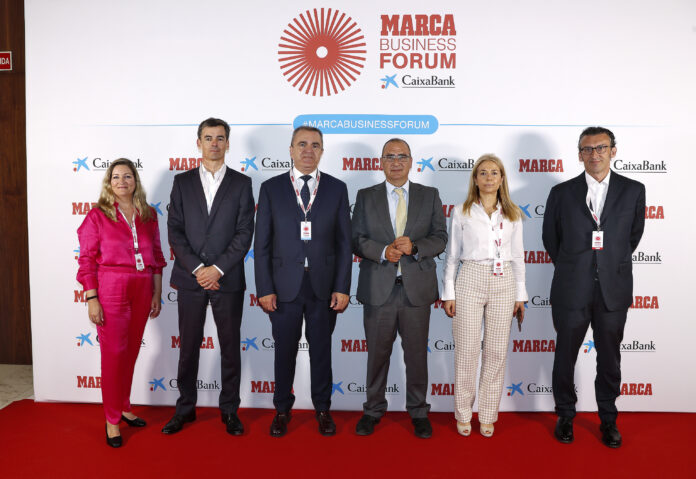 Sport as a driver of the economy. That is the philosophy of the MARCA Business Forum, a new event organized by the Unidad Editorial sports newspaper, sponsored by CaixaBank and opened by José Manuel Franco (president of the CSD). This event was also attended by Iker Casillas, Marc Gasol, Jorge Garbajosa, Almudena Cid, Jennifer Pareja and numerous experts from the sports industry, such as Dmitry Kirilenko, general director of Shakhtar Donetsk, and Alexandre Dreyfus, CEO of Socios.com

“Spain is the only country in Europe that has included sport as a driving force in the recovery process. Now, more than ever, the international projection of sport and of our country shows, beyond our borders, the energy to recover the common spaces that the pandemic took from us all”, stressed the top leader of Spanish sport. Franco asserted that technology and digital transformation must be the axes of the transformation of sport. He also assured that the CSD works on “a benchmark model in management, medicine and organization of sporting events as well as, of course, as athletes and competitions.”

The event was attended by the director of MARCA, Juan Ignacio Gallardo; the general director and director of the Group, Nicola Speroni, and Sergio Cobos, general director of Advertising. In welcoming him, Gallardo highlighted: “Sport is a fundamental part of the leisure and entertainment industry, MARCA must be a meeting point.”

The event, held at El Beatriz Madrid, addressed the hottest points of interest in the sports industry, such as the main trends in sportainment, fan loyalty, monetization or NFTs and Tokens, as well as case analysis of success in the field of environmental and social sustainability.

Iker Casillas confessed: «You don’t choose how to leave. One of the good things about retiring has been meeting again with an Iker I didn’t know. Likewise, Garbajosa pointed out: «Curiosity helps to have less vertigo at the time of retirement. Reinventing oneself is hard, but it is a brutal life experience». Almudena Cid said that retiring so young caused her an “identity crisis”, although continuing to work on television allowed her to do it in a way that she feels “comfortable”. Jennifer Pareja said: “All athletes have something different, and that is wanting to be better every day.”

Dmitry Kirilenko, Shakhtar Donetsk’s commercial director, explained that the Russian invasion has disrupted all football in Ukraine: “We parted ways with our five-star stadium in Donetsk in 2014 due to the conflict that the Russians started. Until 2017 we played in Lviv, then we moved to Kharkiv and from there we went to kyiv.”

For his part, Alexandre Dreyfus, CEO of Socios.com, stated that the key to being successful in Crypto Blockchain is to create a new use of the technology “without trying to duplicate something that existed before” and there are many ways to use NFTs to reward and attract fans and users from all over the world.