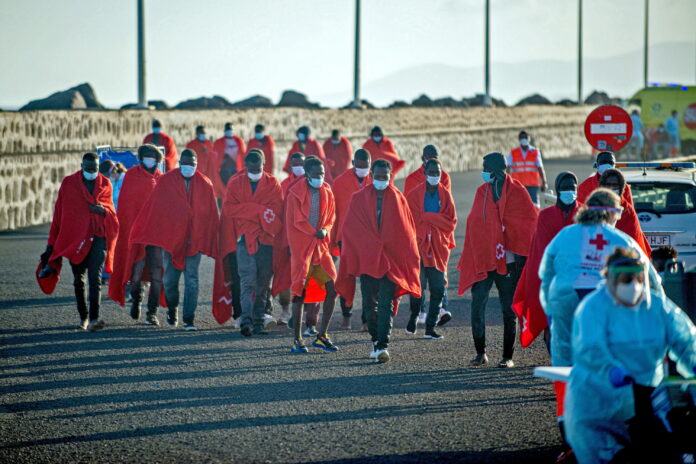 Salvamento Marítimo has rescued two boats in Canarian waters in which a total of 117 migrants were travelling, including a pregnant woman who had to be transferred to a hospital, according to sources from the public body and the Emergency and Security Coordination Center (Cecoes). ) 112.

The first boat, with 61 migrants on board, was intercepted yesterday morning 100 miles south of Gran Canaria. After proceeding to their rescue, Salvamento Marítimo disembarked all of them last night at the Arguineguín pier. There were 37 men in the group; 20 women, one of them pregnant; and 4 babies in good health.

Salvamento Marítimo rescued last morning a pneumatic boat in which 56 migrants of sub-Saharan origin were travelling, most of them men, which was intercepted 35 miles east of the island of Lanzarote.

Late yesterday, the Maritime Rescue Control Center in Las Palmas received notice of a possible boat that would have left from Tarfaya. The Center contacted the ships that were in the area and asked them to be alert and report in case of sighting of any boat or canoe.

The ship ‘Nouadhibou’ was diverted to several specific positions and in the last one it reported that it had sighted a pneumatic boat and reported its course and position. The ‘Polymnia’ tide guard headed there, while the ship was asked to escort the pneumatic until her arrival.

Around 03:00 hours, the rescue of the 56 people who were on board (44 men and 12 women, one of them pregnant) was completed. After verifying a second echo, which turned out to be a false alarm, the tide guard went with all those rescued on board to the dock at La Cebolla, in Arrecife, where she finished her landing around 05:30.

Once on land, the rescued migrants were assisted by health personnel from the Canary Islands Emergency Service (SUC) and the Red Cross. The pregnant woman was taken to the hospital for evaluation, according to Cecoes 112.