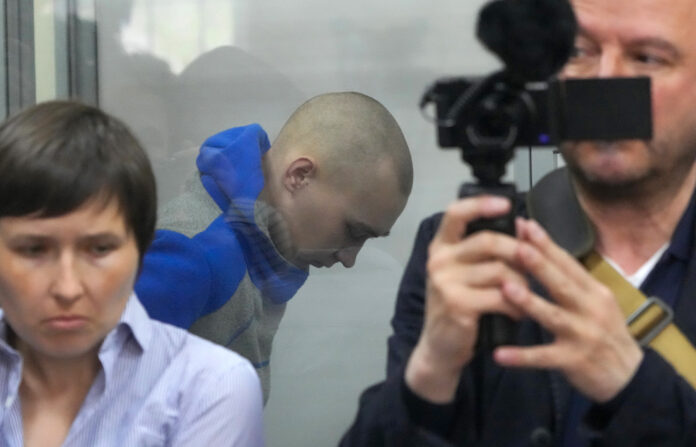 As the Ukrainians fight the Russian advance on their territory, the battle has gone to court. On a bench in kyiv’s Solomensky District court sits Russia embodied in the body of a down-on-his-luck Russian soldier named Vadim Shishimarin, captured by Ukrainian forces after allegedly shooting an unarmed 62-year-old man on a bicycle in the head. Talking on the phone. According to the investigators, on February 28 Shishimarin was part of a column that was intercepted by Ukrainian troops. Television broadcast images of the courtroom where the accused, who faces between 10 and 15 years in prison or chain, was taken. under article 438 of the Ukrainian Criminal Code on ‘Violation of the laws and customs of war’. The first hearing was brief, but the case has great symbolic importance. This is the first war crimes trial during Russia’s intervention in Ukraine that began in February. The kyiv government accuses Russia of atrocities and brutality against civilians during the invasion. Russia denies targeting civilians or participating in war crimes and accuses kyiv of organizing them on its own to smear its armed forces. But the Ukrainian authorities say they have identified more than 10,000 possible war crimes. Private Vadim Shishimarin is 21 years old and was part of the Kantemirovskaya tank division of the Moscow region. The events occurred in the village of Chupajivka, in northeastern Ukraine, east of kyiv, on February 28. In a statement quoted by Reuters, the prosecutor general’s office said the soldier stole a car to escape with four other soldiers. Russians after their column was attacked by Ukrainian forces. “Russian soldiers entered the village of Chupakhivka, where they saw an unarmed resident riding a bicycle and talking on the phone. Prosecutors say the suspect was ordered to kill the civilian to prevent him from reporting the presence and location of the Russians He fired several shots through the open car window with his assault rifle pointed at the civilian’s head The man died at the scene just a few dozen meters from his home,” Ukrainian Prosecutor General Irina Venediktova said in a statement. Shysimarin’s lawyer says his client had confessed to killing the victim, but has not yet discussed whether to plead guilty. ble. The alleged crime was committed with an AK-74 rifle. Blogger Vladimir Zolkin, who films interviews with Russian prisoners, posted a conversation with Vadim Shishimarin in March. The soldier said that after the invasion of the territory of Ukraine, he and his colleagues “moved around the area” without fighting.” According to his version, the Russians mistakenly wounded their own and a convoy of the wounded was formed to return to the Russian Federation. Then “the column was fired upon. And a day later they took me prisoner, well, I surrendered,” the Russian soldier says in the video.Ukrainian authorities accuse the Russian military of committing numerous crimes, from killing civilians to looting.Ukraine’s prosecutor general claims to be investigating more than 10,700 cases of war crimes involving more than 600 suspects, including Russian soldiers and civil servants. In the kyiv region alone, according to the Ukrainian authorities, during the occupation (which lasted about a month) about a thousand civilians were killed at the hands of the Russian military.The International Criminal Court is also investigating alleged war crimes.The UN Human Rights Council previously approved a resolution to investigate allegations against Russian military personnel taking part in hostilities on the territory of Ukraine. The document mentions cases of the use of firearms, torture, sexual violence (among others) that UN representatives documented in Ukraine.