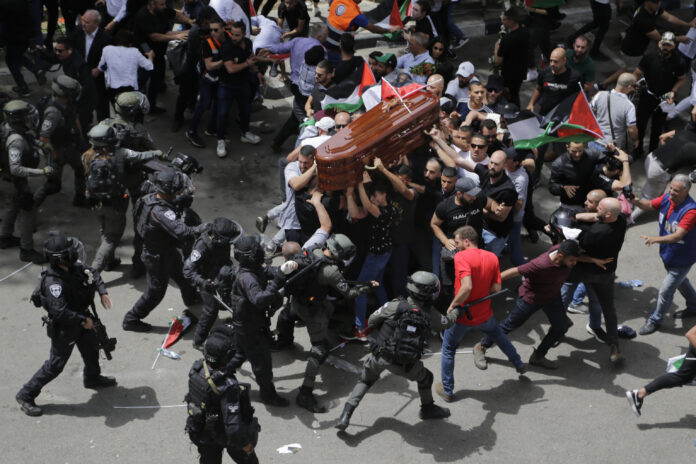 The international community has denounced the intervention of the Israeli police on Friday during the funeral of the Palestinian-American journalist Shireen Abu Akleh, whose coffin almost fell to the ground after a charge by the security forces against the assistants who carried it on their shoulders.

Thousands of Palestinians attended the funeral of the Al Jazeera journalist, who was shot in the head on Wednesday while covering an Israeli military operation in the West Bank, a Palestinian territory occupied by Israel since 1967. The reporter was wearing a bulletproof vest marked ” Press” and a helmet.

The incidents erupted when police tried to disperse the crowd after the coffin containing the reporter’s remains left the Saint Joseph hospital in East Jerusalem, a Palestinian sector occupied by Israel.

The journalist’s coffin was about to fall, but was saved in extremis, according to images broadcast by local television.

“The images of the Israeli police intervention in the funeral procession deeply disturbed us,” US Secretary of State Antony Blinken has reacted.

The European Union has condemned “the disproportionate use of force and the disrespectful behavior of the Israeli police towards the participants in the funeral procession”.

The French representation in Jerusalem has said that the “police violence” was “deeply shocking” and the secretary general of the UN, Antonio Guterres, has been “deeply disturbed”.

“The occupation forces not only killed Shireen, but also terrorized those who accompanied her to her final resting place,” Qatar said.

“If these nationalist chants don’t stop, we will have to disperse them using force and prevent the funeral from taking place,” an Israeli policeman told the crowd gathered inside the San Jose hospital through a megaphone, according to a video released by the armed body.

The “rioters prevented the relatives from loading the coffin into a hearse to go to the cemetery, as agreed with the family. The crowd refused to put the coffin back into the hearse and the police intervened to prevent take him away. During the disturbance caused by the crowd, glass bottles and other objects were thrown,” according to a police statement.

According to the Palestinian Crescent, 33 people were injured during the funeral and the Israeli police reported that they had arrested six people.

After the police intervention, the crowd followed the coffin to a church in the Old City, where a mass was dedicated to him before his transfer to the cemetery.

In an unusually unanimous position, the UN Security Council “strongly condemned the murder” of the journalist and called for “an immediate, exhaustive, transparent and impartial investigation” to “guarantee accountability.”

The Palestinian Authority, Al Jazeera and the government of Qatar accuse the Israeli army of murdering the 51-year-old journalist.

At first, Israel claimed that the reporter “probably” was shot dead by Palestinian fighters. But afterwards, she said that she could not rule out the responsibility of the Israeli soldiers.

According to a statement from the Palestinian prosecutor’s office in the West Bank city of Ramallah on Friday, “the initial results of the investigation showed that the only source of the shooting against Shireen was the Israeli occupation forces.”

The Israeli army had assured that it was not possible to immediately determine the origin of the shot, which could come from the Palestinian or Israeli side.

The Israeli authorities ask that the bullet be handed over to them for a ballistics examination and propose that both Palestinian and American experts be present.

But the Palestinian Authority, led by Mahmoud Abbas, has rejected the idea of ​​a joint investigation with Israel and stated that it wanted to refer the case to the International Criminal Court. “The Israeli authorities committed this crime and we do not trust them,” he said.

The funeral took place against a background of renewed fighting near Jenin during army operations. An Israeli policeman was killed by Palestinian fighters and 13 Palestinians were injured.

The Israeli army launched several operations in the Jenin refugee camp, a stronghold of the Palestinian armed factions from which the authors of the recent attacks in Israel originate.