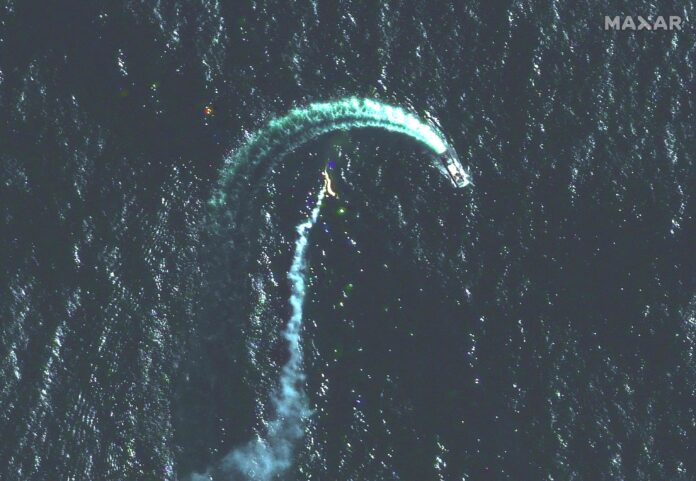 Ukraine says it has damaged a Russian navy logistics ship near Snake Island, a small but strategic outpost in the Black Sea, as relatives of Ukrainian soldiers sheltering in the besieged Mariupol steel mill plead with the rescue.

Renewed fighting around Snake Island in recent days may turn into a battle for control of the western Black Sea coast, according to some defense officials, as Russian forces struggle to advance north and west. eastern Ukraine.

“Thanks to the actions of our naval sailors, the support ship Vsevolod Bobrov has caught fire, it is one of the newest in the Russian fleet,” said Serhiy Bratchuk, spokesman for the Odessa regional military administration.

The Russian Ministry of Defense has not offered any information about the event at the moment.

Satellite images provided by Maxar, a private US-based company, show the aftermath of what it said were likely missile attacks on a Russian Serna-class landing craft near the island, near the sea border of Ukraine with Romania.

The footage also shows recent damage to buildings on the island, made famous by its Ukrainian defenders’ foul-mouthed defiance early in the invasion.

Russia faces more setbacks on the battlefield on Friday, after Ukraine expelled its troops from the region around the country’s second-largest city, Kharkov, the fastest advance since driving Kremlin forces out of kyiv. and from the Northeast more than a month ago.

Reuters journalists have been able to confirm that Ukraine is now in control of the territory that stretches to the banks of the Siverskiy Donets River, some 40 km (25 miles) east of Kharkov.

Images released by the Ukrainian Airborne Forces Command show several burned military vehicles and segments of a bridge apparently destroyed and partially submerged in the river.

Regional authorities have reported several ongoing missile attacks around Poltava and shelling in Dergach, near Kharkov, in which two people have been killed.

In kyiv, the wives and relatives of Ukrainian fighters sheltering at the Azovstal steel plant in the southern port of Mariupol plead for their rescue to be facilitated. Russian forces continue to shell the steel mill, the last bastion of the Ukrainian resistance in a city almost completely controlled by Russia after a siege of more than two months.

“I want all the defenders who are there to return home so they can live a normal life with their children and relatives,” said Maria Zimareva, whose brother is inside the steelworks. “They’ve earned it. Why can others walk down the street with their loved ones and they can’t? Why doesn’t anyone help them?”

kyiv replies that it is working on the rescue of the military, many seriously injured. “We have started a new round of negotiations around a roadmap for an (evacuation) operation. And we will start with those who are seriously injured,” Deputy Prime Minister Iryna Vereshchuk told 1 1 television.