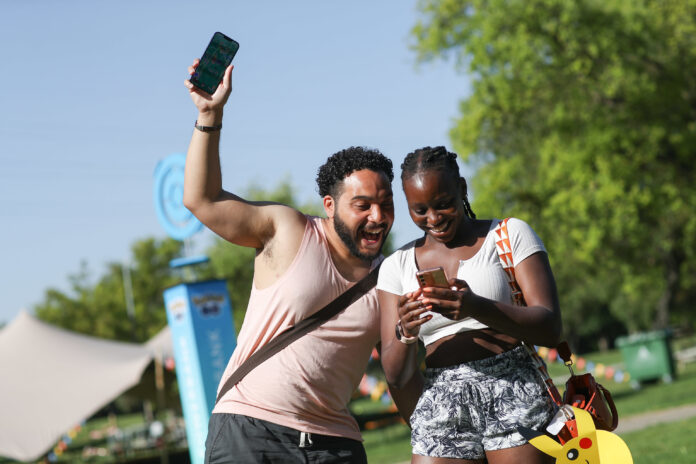 The Alamillo Park, in Seville, is not usually very crowded on Fridays, according to Google itself, and yet hundreds of people are spread out, in groups, on the lawn. Everyone looks at the mobile, attentive. Some make gestures of victory and suddenly start running, stampeding, towards a tree about 100 meters away. Someone yells: “There’s a Taurus, a shiny Taurus!” and the notice alerts more visitors, who flock to the area. At first glance there is nothing there, but on their mobiles the story is different, the world is different and what awaits in that tree, according to their screens, is a Pokémon.

The mobile video game Pokémon GO, which will be six years old in July, already has more than a billion downloads for both Android and iOS and for the first time in Spain, has held an event called Safari Zone that ends this Sunday to which they have attended thousands of people. The entire Parque del Alamillo has been decorated for the occasion with rest areas, various positions to charge mobile phones and food trucks.

The case of this game is worthy of study: it has managed to survive more than five years, maintaining a stable community of regular users and, furthermore, it has been able to catch people of all ages. In fact, during the first hours of the event it was difficult to find players under 40 years of age.

One of the early risers, Stephan Williams, is an Australian retiree who takes advantage of this event to get to know Seville. “I started playing in 2016, using it as an excuse to go for a walk, since since I stopped working it seemed that the armchair had kidnapped me,” he explains. Williams is a multitasker, managing to hold two phones in one hand, use the other to play games on both devices and talk to us at the same time. «I had never finished connecting with my two children, I had them very old and I have always felt like their grandfather, unable to find hobbies or tastes to share. However, everything changed when I found out during a family gathering that my children went out to Sydney Park with my grandchildren on weekends to play Pokémon GO. I was already level 30 in the game and they couldn’t resist the invitation to team up with me, and it’s become a tradition ever since,” he relates. Although his relatives have not been able to travel the more than 15,000 kilometers that separate Australia from Spain, he says that he is capturing more pokémon so that he can exchange them when he returns.

The case of this Australian is not the only one. “60% of the attendees have arrived by plane from outside Spain and approximately a third are from outside Europe,” says Philip Marz, head of marketing for Pokémon GO. Citizens of the United States, Latin America and even the Philippines like Margarita Cuyegkeng, who takes advantage of the moment to answer us to rest from the phone and leave her son as a relay in the game. “I didn’t even know what Pokémon was, but my son came home from school one day determined that he wanted to play. It still seemed small to me. So we made a deal to play together on my phone until I was old enough to have a device of my own. In the end I ended up hooked more than him, “says Cuyegkeng, while she puts her son’s Pikachu shirt on.

In 2016, a study conducted by Survey Monkey revealed that Pokémon GO became the video game with the most active users per day in the United States, surpassing Candy Crush. And during the first months it even surpassed social networks in the average time of daily use.

The fact that this mobile video game has managed to bring together thousands of people in a face-to-face event, six years after it was released, makes it a rare sight, since the mobile video game market is ephemeral, with an inconstant flow of active users whose peak usually appears the first months of life of the game, adding after uninstalls and people who do not reopen the application. According to Flurry, a US-based mobile advertising, monetization and analytics company, a mobile app typically begins to experience a churn period about three months after peak usage. Taking into account that Pokémon GO had its peak almost six years ago, its survival is quite a feat achieved thanks to its very heterogeneous group of users. “Many friendships that we see today at the event had their origin in the digital world,” says Humberto Kam, director of global live events for Pokémon GO. “This is where you can experience the metaverse because everything is built in a digital world, in the app, coming to life here in Seville,” he adds.

Cristina González has been attached to Pikachu (a creature that looks like a yellow mouse) and Eeve (shaped like an adorable puppy) since she was in school. “I changed Pokémon with the link cable of the Game Boy console at recess, then I went to do it from my mobile and that’s how I met my husband,” she says as he celebrates having captured an alternative and rare version of digital creatures. Her love story began in 2018, in Madrid’s El Retiro park, at the foot of the Monument to Alfonso XII.

In this area, in the digital world of the video game, several PokéStops coincide, places where players can collect objects that will help them and where creatures appear to capture. That is why today, especially when the good weather arrives, it is still common to see several people standing with their mobile phones. This is how Cristina and Kevin met, sitting on the steps of the monument, hunting pokémon from afternoon until sunset, at which point she started talking to him. We ask them what they have in their bag at the merchandising stand, a mini Pokémon T-shirt for their future child, with whom they plan to share the hobby that brought them together. Undoubtedly a game capable of crossing generations.