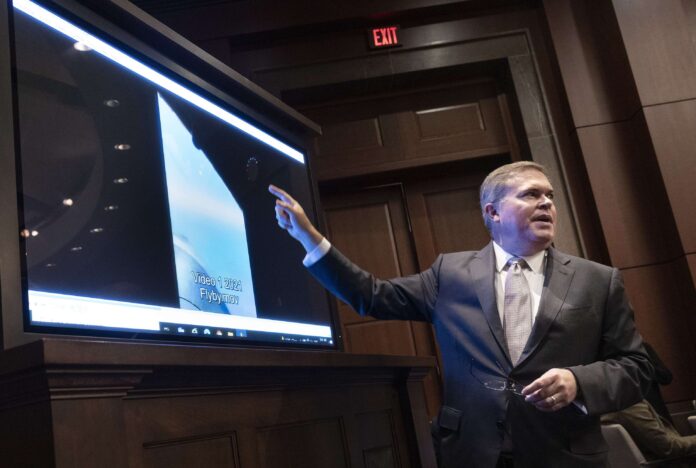 Pentagon officials affirmed this Tuesday before the US Congress that they are sure that their military has encountered unidentified aerial objects or phenomena and raised the number of alerts received since 2004 to 400.

For the first time in more than 50 years, Congress hosted a hearing on UFOs in which US Deputy Secretary of Defense for Intelligence and Security Ronald Moultrie and Deputy Director of US Naval Intelligence Scott Bray testified.

During the session before a House Intelligence subcommittee, several legislators emphasized that the reason for the hearing was to end the stigma on this issue so that the military inform their superiors when they encounter a phenomenon of this type.

The chairman of the subcommittee, Democrat André Carson, who represents a district of Indiana, recalled that more than half a century ago the US Government put an end to the “Blue Book” project, which analyzed 12,618 UFOs detected by the country’s Air Force between 1952 and 1969.

Years later, in 2017, lawmakers learned that the Department of Defense had quietly started a similar project to track what the US has moved from calling UFOs to unidentified aerial phenomena; and last year Congress wrote the rules for this initiative.

Moultrie explained that in fiscal year 2022 (which began last October) the Pentagon has created an office to supervise the collection, treatment and analysis of any encounter with UFOs or phenomena of this type, which are not always objects.

For his part, the deputy director of US Naval Intelligence, Scott Bray, mentioned an official report published almost a year ago stating that the country has detected between 2004 and 2021 a total of 144 unidentified aerial phenomena, and added that this figure has risen to 400.

The reason for this increase is that soldiers have begun to report more of this type of phenomenon, thanks to the work that is being done to end the stigma, the increase in systems such as drones in US airspace and the improvement of sensors and radars to detect them.

The deputy director of Naval Intelligence pointed out that, after completing the analysis, it is likely that the UFOs fall into categories such as radar interference, natural atmospheric phenomena, development programs of the US government or industry, or foreign adversary systems.

“And there is another box that allows us to put difficult cases, and the possibility of surprises and potential scientific discoveries,” he said.

Despite his estimates, Bray did not rule out that the number of 400 will drop, since some of these alerts are based only on testimonies of people, while many others are supported by more objective measurement systems, such as sensors or radars.

Democratic legislator Adam Schiff was intrigued since the report from June last year, released by the office of the US Director of National Intelligence, listed 18 unidentified aerial phenomena, which apparently had sophisticated technology and flew without ” no discernible means of propulsion”.

In that sense, he asked Bray if the US knows of any foreign adversary capable of making objects fly without a distinguishable means of propulsion, to which the deputy director of Naval Intelligence replied that they are not aware that any rival can do so.

“I would just say that there are a number of events that we don’t have any explanation for,” Bray said, adding that these types of objects are what they are most interested in.

During the session, those responsible for the Pentagon illustrated their words with videos of UFOs, although many times the explanation can be simple.

In one of them, which according to Bray was recorded on the US coast, they detected a reflective triangle that could be seen with night glasses and that they suppose could be a drone, precisely because the use of this type of lens would facilitate the reflection of a Triangular shape.

Another of the lawmakers, Republican Eric Crawford, asked defense officials if they could offer a concrete example of an object whose origin is not natural and cannot be attributed to humans.

Bray cited a video recorded in 2004 by a Navy fighter jet from the nuclear-powered aircraft carrier USS “Nimitz”: “We have data on that and it’s just still unresolved.”