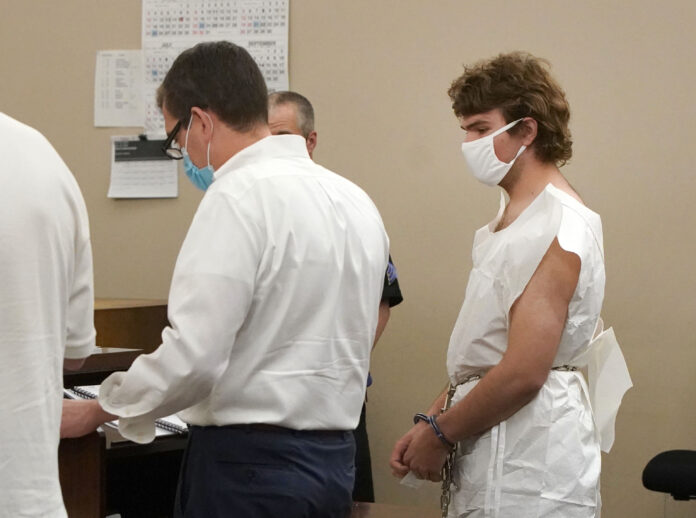 Payton Gendron traveled more than 300 kilometers from his hometown in northwestern New York to commit one of the worst racist killings in US history. The 18-year-old shooter, wearing a helmet, bulletproof vest, military gear and carrying an assault weapon, entered a supermarket in a heavily African-American area of ​​Buffalo, near the Canadian border, on Saturday afternoon to finish off bullets with the life of 10 people and wounding three others, almost all black.

The murderer, who pleaded not guilty after being arrested by the police, recorded everything on a camera to broadcast the execution live on social networks, part of his plan to promote his macabre conspiracy. Shortly after his arrest, a racist manifesto surfaced on the internet in which the perpetrator of the massacre refers to the “Great Substitution” theory, a conspiracy of far-right groups that speaks of the threat of white genocide perpetrated by immigrants of other races.

In the video, with the small camera attached to the helmet, Gendron’s insult to blacks can be seen written on the barrel of his gun, which he bought legally and without hindrance at a store in Endicott, New York. The owner of the establishment, Robert Donald, 75, was “frozen” when called by federal investigators to ask about his young client, who showed no signs of being up to anything strange.

Gendron didn’t wait to start dropping victims along the way. He got out of the car shortly after 2:30 PM and shot four people in the parking lot on Jefferson Avenue, leaving three dead and one wounded, apparently out of danger.

Then he walked into the Tops Friendly Market supermarket in Buffalo and went ahead with the execution. “He was heavily armed,” said Buffalo Police Chief Joseph Gramaglia. “He had tactical gear, a helmet” and a vest that prevented Aaron Salter Jr., a security guard and former local police officer, from stopping him.

There was an exchange of fire between the two, but the vest repelled one of the bullets and Gendron was able to take him down afterwards. With no resistance left, he entered the supermarket and killed six other people in cold blood. One of them is Roberta Drury, 32, who had come to the Tops to prepare dinner afterwards. “She was very vibrant. She was always the center of attention and she made an entire room smile,” her sister Amanda told The New York Times.

Of the 13 people who were shot, 11 were black. President Joe Biden himself spoke of “an epidemic of hate throughout our country evidenced by acts of violence and intolerance” when condemning the massacre. “We must report it and condemn it. Racially motivated hate crimes or acts of violent extremism are harms against all of us, and we must do everything we can to ensure our communities are safe from such acts.” The presence of the president in Buffalo before his trip to Asia is not certain, and last night he had not had time to speak with the relatives of the 10 deceased.

According to the police and the mayor of the city, Byron Brown, Gendron spent days studying the area where the massacre would be perpetrated and that his mission would have a greater impact. “It appears that he was here, maybe several days, based on the reports that I’ve been hearing, and that he kept an eye on this community, exploring the supermarket and talking to some people in the area,” Brown told CNN.

The area chosen by Gendron, where the supermarket is – zip code 14208 -, has a black population of 78%, according to the Census Bureau, one of the areas with the highest concentration of African Americans in the country. The contrast is monumental with respect to the region where the shooter lives, in Conklin, New York, which is only 0.4% black and 89% white.

These neighborhoods, like the one where the massacre occurred, are the clear reflection of the racial segregation and systematic racism that the United States has suffered for decades, despite the constant speeches of rejection from both sides of the political spectrum. Buffalo-Niagara Falls is the sixth most segregated metropolitan area in the country when the distribution between black and white residents is measured, according to the University of Michigan.

The tragic incident in this impoverished part of the country has dusted off the memory of similar ones with a racist tint, such as the one that happened in 2015 in Charleston that left nine dead in a church, or the attack on a synagogue in 2018 that left 11 dead. .

Meanwhile, in Conklin, stunned by the slaughter of a family described as “conventional” in a small community in upstate New York. The neighbors of the same street remembered having seen the young Payton play basketball with his other two brothers, sons of two engineers, and at school they described him as an unsociable boy and fond of weapons, something common in rural areas. in United States. As common as the massacres themselves: 198 have occurred since the beginning of the year.