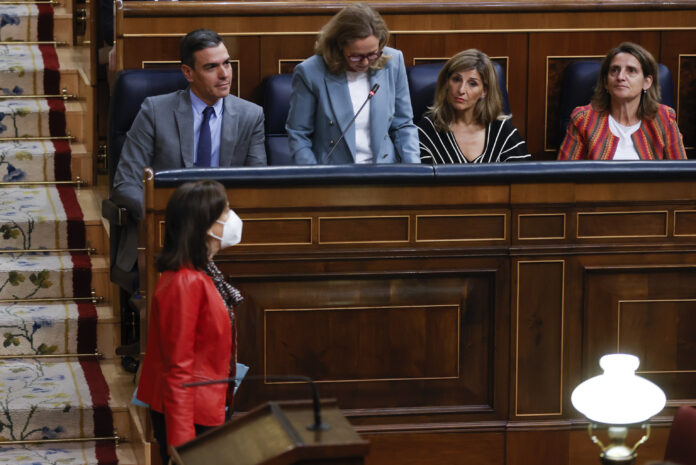 The double case of espionage to independentistas and to the motives of the president, the Minister of Defense and the Minister of the Interior remains latent and plagued with unknowns. The Government wants to turn the page as soon as possible and tries to shift the public focus to other debates. The intention is thus to dilute a “scandal full of black holes”, in the words of the spied forces, and a real “minefield” for the institutions, according to the opposition.

Neither one nor the other is willing to forget an issue that has put the intelligence services in the trigger; it has deteriorated the public image and the political credit of the Minister of Defense; it has opened a gap in the Council of Ministers; It has eaten away at the investiture bloc and has cast serious doubts on the effectiveness and solvency of the team closest to Pedro Sánchez and his right-hand man, the Minister of the Presidency, Félix Bolaños.

The unanswered questions are piling up and there are few who trust that the president will clarify them in his appearance in Congress at the end of the month, predictably after having met, in an attempt to calm things down, with the president of the Generalitat, Pere Aragonès . It is a difficult objective because the espionage case has put in the hands of the independence movement a weapon of pressure on the Government, a true sword of Damocles on the legislature. This week both allies and opposition forces will once again surround the Executive in Congress.

It includes 65 names, some clearly involved in the challenge to the State in 2017 that resulted in the application of 155 and a conviction of those responsible for sedition and embezzlement, followed by the pardon granted by Sánchez; and others, defenders of the independence cause but little suspected of promoting criminal acts or being a threat to the integrity of the nation.

Of the entire list, only 18 people have been justified in espionage by presenting the reasoned judicial authorization and the file prepared on each of them to the Official Secrets Commission. Will these people be able to know the specific reasons why they have been investigated? Did the order start from La Moncloa? What information was extracted from your devices and who had access to it? Will your files be declassified as you claim?

Added to this are the unanswered questions regarding the remaining 47 names on the list that insist on knowing who ordered the spying on them, whether the CNI did it without judicial authorization or it was uncontrolled elements of the intelligence services. These people maintain that, in the absence of justification, their fundamental rights have been violated and even predict that new cases of spies will come to light that will affect more politicians and more parties.

The president of the Generalitat, Pere Aragonès, is the most striking personality spied on by the CNI. His phone was tapped when he was vice president of the Government, coinciding with the Tsunami Democràtic revolts in response to the procès convictions, but also when he was already negotiating with the socialists the way for the ERC to facilitate the investiture of Pedro Sánchez with his abstention and become preferred partner of the coalition government.

Aragonès demands to know what the reasons were for investigating him and asks the president for an explanation as to why he was treated as an ally if he was considered a threat to the State. He insists on knowing the entire report on his person and that, as the deputies of the Official Secrets Commission verified, he had many passages crossed out, mostly corresponding to telephone conversations.

Were contacts with the Prime Minister himself intervened? And with those convicted of sedition or their lawyers? Were your conversations with foreign politicians or organizations sympathetic to the independence cause spied on? They are unanswered questions.

The president hopes to clarify these points in his meeting with Sánchez and insists that he be given guarantees that such a case will not be repeated. A security difficult to obtain if the independence movement raises the flag of “we will do it again”.

The Executive announced that the telephones of the president and the ministers of Defense and Interior were attacked with Pegasus just at a time of maximum tension with Morocco. He also reported an espionage attempt on the cell phone of the Minister of Agriculture and former ambassador in Rabat, Luis Planas, and put the matter in the hands of the National High Court, which has declared the summary secret.

The unknowns are many: Who spied on the president and the ministers? Was it Moroccan secret services, Israeli intelligence, Russian espionage? What information was stolen? Is it likely to put national security at risk or can it be a blackmail weapon? Why was the espionage made public coinciding with the Catalan scandal if there were no data available to explain it? Was there a disclosure of secrecy? Was the damage inflicted on the CNI assessed? When was it decided that the spy chief, Paz Esteban, should be removed?

All parties harbor suspicions and there are even those who believe that the case was prefabricated. All doubt that the National Court can answer the questions and regret that the Government has questioned the solvency of the CNI. The opposition is already asking for measures to shield the intelligence service from political interests and to reform the National Security Law to assess the causes of removal of the CNI leadership.

The CNI acts protected by law, informing the Government and in accordance with the objectives set by the latter. The Center’s work conforms to the Intelligence Directive, which is secret and is approved by the Council of Ministers at the proposal of the Delegate Commission for Intelligence Affairs. In addition, the Presidency is responsible for ensuring compliance with the protocols that guarantee Government communications.

Allies and opposition want to know how many intelligence directives have been approved since Sánchez arrived at La Moncloa. CNI sources assure that only one, in 2019. They want to specify how many times the Intelligence Affairs Commission has met in order to follow up on the objectives entrusted to the CNI. The same sources specify that none. And, in addition, they try to reveal the degree of knowledge that Sánchez had of the Center’s activities, since the president receives intelligence reports on a daily basis.

They also want to know if the Presidency complied with the protocols and alerts issued by the Cryptologic Center to protect Sánchez’s communications and how many times since he came to power his phone has been sent to the Center to be checked in depth. The suspicion is growing that the Government itself was negligent, putting the security of the State at risk and, for this reason, they are asking to determine the responsibilities of the Minister of Defense, Margarita Robles, and the Minister of the Presidency, Félix Bolaños, and reject that they Shelve the dismissal of the director of the CNI.