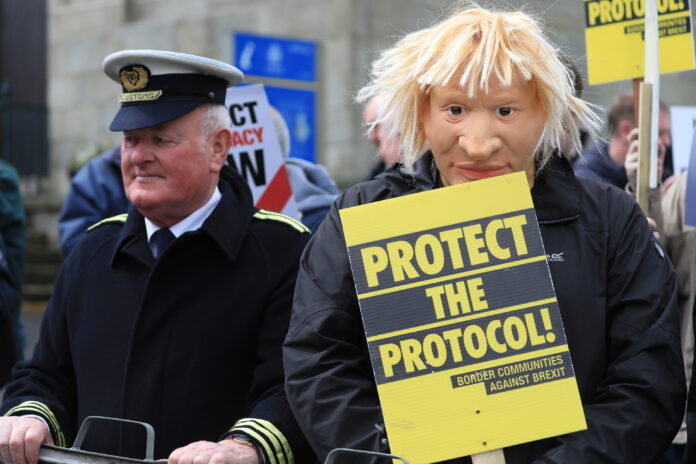 Boris Johnson always regarded the Irish issue as the annoying “mosquito” in the Brexit negotiations. Perhaps that is why he has not lavished himself on trips to Belfast, for fear of the “stings” of the controversial Protocol when six years of the referendum are about to be completed. The “premier” finally appeared in the capital of Ulster on Monday, a week after his escape to Helsinki, to claim the pending issue since leaving the EU.

Johnson advanced his intention to “reform” the Irish Protocol but not to “break” it directly. He on the one hand assured that there is still “a sensible landing place” with Brussels, but on the other he warned of the “need to act”. The possibility that this action is consumed on Tuesday, with the announcement of a new law that unilaterally suspends parts of the agreement sealed with the EU, has triggered alarms, but also suspicions.

Johnson’s incursion into Belfast coincides this week with the trip of a delegation of US congressmen, worried about the future of the Good Friday Peace Agreement and the possibility of social unrest. The Irish Foreign Minister, Simon Coveney, meanwhile reminded the “premier” that “a difficult summer” awaits his country if he decides to open a trade war with the EU, against the background of the Ukraine conflict and the cost crisis of the life.

In any case, Johnson moderated his speech upon arrival in Northern Ireland, aware of the ulcers raised by his Foreign Secretary Liz Truss, who began in a conciliatory tone with Brussels but has been turning towards tough stances for playing into the hands of the “Brexitera” bases and offer themselves as a credible alternative to Johnson if he continues to bite the “Partygate”.

In an article in The Befast Telegraph, Johnson himself recalled that the Irish Protocol was negotiated “in good faith”, although he implicitly acknowledged that it was done in a rush, before the Trade and Cooperation Agreement with Brussels was approved. The “premier” stressed that the agreement was reached “before a global epidemic and a war in Europe that has created the biggest cost of living crisis in half a century.”

Faced with requests from the unionist parties to throw the Protocol in the rubbish bin, Johnson reiterated that this is “the wrong response”, and that the solution lies in introducing changes (such as the creation of a “green lane” for Great Brittany for sale exclusively in Northern Ireland) and have a “reformed” text before 2024.

The unionist parties maintain that the Protocol has served to create an internal customs in the Irish Sea and simply ask that the barriers fall. Jeffrey Donaldson, leader of the Democratic Unionist Party (DUP), however moderated his speech before Johnson’s visit and left the door open to the “reform” of the Protocol, but not before warning the “premier”: “Words are not enough for us , we want actions”. For now, the DUP has boycotted the new Stormont Assembly and has renounced being part of a “power-sharing” government, as stipulated in the Good Friday Agreement. After losing their hegemonic position, after the historic victory of Sinn Féin, the uninonists have decided to bet on obstructionism and close their eyes to the evidence: the parties in favor of the Irish Protocol win by 53 to 37 in the new distribution of forces .

The local leader of Sinn Féin and future chief minister, Michelle O’Neill, has accused the unionists of wanting to “kidnap” the will of the Northern Irish and has recalled that the Protocol is the guarantee to avoid a return to a hard border on land between the two Irelands. O’Neill has been in favor of a negotiated solution with the EU to modify specific issues of the text agreed on the day of it.

Northern Irish businessmen have also taken action on the matter and have asked Johnson not to take “unilateral action” in a letter signed by the 14 most representative associations, which consider that there is still a possibility of an agreement with the EU. Businessmen lament the little contact they have been able to maintain with Downing Street and the “political polarization” caused by the Protocol.