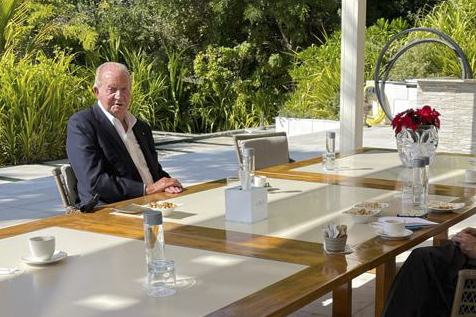 King Juan Carlos is finalizing his return to Spain after this Saturday he spoke by telephone with Felipe VI in Abu Dhabi, where the latter had traveled to convey his condolences for the death of the former head of state of the United Arab Emirates, Sheikh Khalifa Bin Zayed al-Nahyan. The telephone conversation, before Felipe VI returned to Spain, and in which both agreed to meet in Madrid, has favored the possibility that the return of the King Emeritus, who has resided in Abu Dhabi since August 2020 as a guest of the deceased sheikh , be closer.

Thus, this Monday, the journalist Fernando Ónega has announced on Onda Cero that Don Juan Carlos will be in Sanxenxo (Pontevedra) this weekend, specifically on May 21. Prior to his trip to Sanxenxo “he will be received at Zarzuela, he will see his family and accept the conditions”, he has said. The Royal House has not confirmed to Efe if the return of the emeritus will take place on that date, waiting for Juan Carlos I himself to communicate it. Nor have they ratified the details in circles close to the Monarch.

If it is this weekend, the return of the King Emeritus will coincide with the celebration of regattas in Sanxenxo, where the boat with which he has competed until he settled in Abu Dhabi participates. These regattas are prior to the world championship to be held in mid-June.

Among the unknowns to be revealed by the Royal House is where the Emeritus is going to stay when he is in Madrid: if he will finally do so in La Zarzuela, the residence of the head of state, and if he will hold a meeting with his son there. Don Juan Carlos moved to Abu Dhabi almost two years ago after it was revealed that he had allegedly charged commissions for the work of the AVE to Mecca.

On March 2, the Anti-Corruption Prosecutor’s Office closed the three investigative proceedings that it had open: for the alleged collection of 65 million euros in commissions for the works of the Medina-Mecca high-speed train, for alleged undeclared donations and for the fortune of the emeritus in tax havens. A few days later, King Juan Carlos informed his son of his desire to “consider” his return to Spain, “although not immediately.”