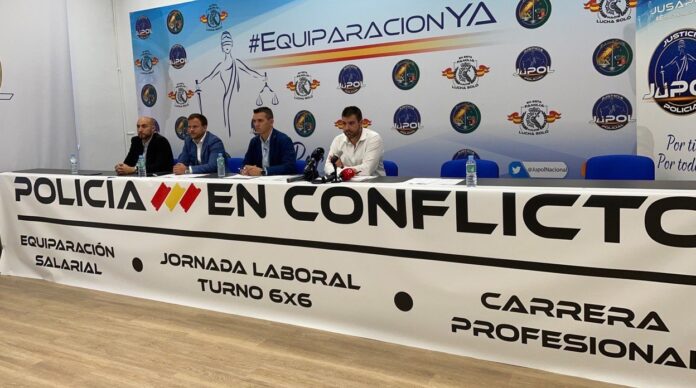 The majority police union has once again put the Ministry of the Interior on its radar due to the stagnation of its claims. Jupol does not feel heard on three points that he considers “fundamental”: equal pay, selection processes and working hours. After the interruption of communications, Jupol has declared today the collective conflict.

This decision deepens the gap between the police group and the department of Fernando Grande-Marlaska which, as Jupol has warned, will have to face protests and mobilizations. “We are not going to sit idly by in the face of the Government’s inaction,” they have sentenced. The majority organization in the Council of the National Police has attributed to the “null” relationship with the General Directorate that their claims do not advance.

Aarón Rivero, general secretary of Jupol, recalled that salary equalization, his “historic” claim, has not been addressed and is, he added, “incomplete.” In addition, a change in the functioning of the Police Council is requested, since it considers that “it only serves as a forum for the Administration to announce its intentions to the union organizations and, as a general rule, it does not take into account allegations or proposals “.

In addition, he has pointed out that “the draft of the Royal Decree on selective processes and the lack of negotiation of the working day have been the triggers to present this collective conflict, as well as other matters forgotten by the Ministry of the Interior and by the General Directorate of the Policeman”.

The union also emphasizes that the salary equality between the National Police, the Civil Guard and the rest of the autonomous police forces “was falsely closed” in 2018. “We are already fed up with unfulfilled promises, that for the same job we do not have the same salary, that we don’t have a decent retirement at 59 like other police forces. And meanwhile, neither the Minister of the Interior nor the General Directorate has given us an answer or a solution to this injustice,” Rivero denounced.

From Jupol they observe five salary gaps between the National Police and the Civil Guard with the regional police: monthly salary, extraordinary payments, attendance at trials, overtime and the second activity or early retirement.

Rivero has also requested the definitive implementation of the 6×6 work shift: six days of work, six days off, for those units of the National Police that allow these rotations. It is a shift that was implemented with the arrival of the pandemic and is still in force.