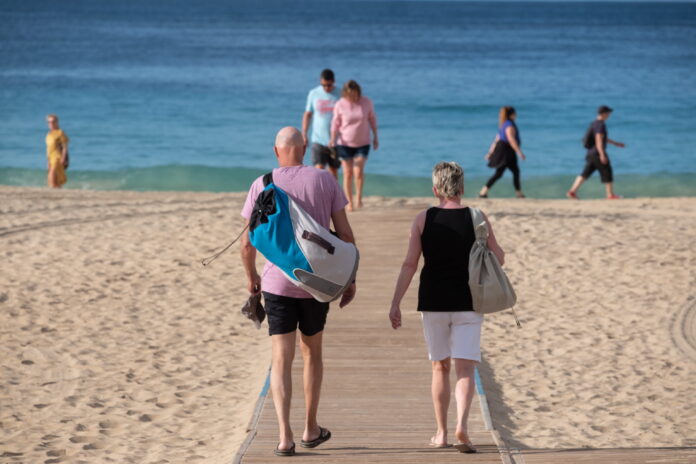 Today, Tuesday, the first heat warning of the year arrives in mainland Spain because the State Meteorological Agency (Aemet) forecasts 36 degrees on the banks of the Ebro in Zaragoza between 2:00 p.m. and 9:00 p.m.

This yellow warning for risk of high maximum temperatures will continue this Wednesday at the same hours and in that same area of ​​the province of Zaragoza.

Not surprisingly, the Aemet prediction indicates that temperatures will rise in most of the peninsula, except in western Galicia, where they will drop. The thermometers will mark more than 35 degrees in the Guadalquivir valley and in the middle of the Ebro.

The hottest capitals will be Córdoba and Zaragoza (36ºC); Granada, Lleida and Seville (35); Albacete (34), and Jaén and Murcia (33). Instead, a milder environment is expected in A Coruña, Las Palmas de Gran Canaria, Pontevedra and Santander (23).

This situation will be the prelude to “a progressive and practically generalized increase in temperatures on the peninsula and the Balearic Islands” throughout this week, which will take the thermometers to “high summer values” with “both daytime and nighttime heat”, according to Rubén del Campo, spokesman for the Aemet.

“From Wednesday the 18th and probably until Sunday the 22nd, 34 or 35 degrees will be exceeded in the central hours of the day in large areas of the center and south of the peninsula, also in the Ebro valley and extending during Friday and the weekend. a week to a good part of the peninsular territory, except for the northern third”, he commented.

Del Campo added: “Those 34 or 35 degrees will also be exceeded in the Balearic archipelago. It is even possible that we are already talking about the first 40 degrees of maximum temperature this year 2022 at points in the Tagus, Guadiana and Guadalquivir valleys.”

He has also assured that “above all, from Friday this temperature could be reached in cities such as Badajoz, Seville or Córdoba. Other important cities, such as Zaragoza, Toledo or Madrid will probably exceed 38 degrees of maximum temperature.”

“In these same areas, in addition, the night temperatures will be very high. In many points it will not drop below 20 degrees, that is, we will talk about tropical nights.

It is likely that the temperatures will drop again starting next Monday to reach more typical values ​​for the end of May.