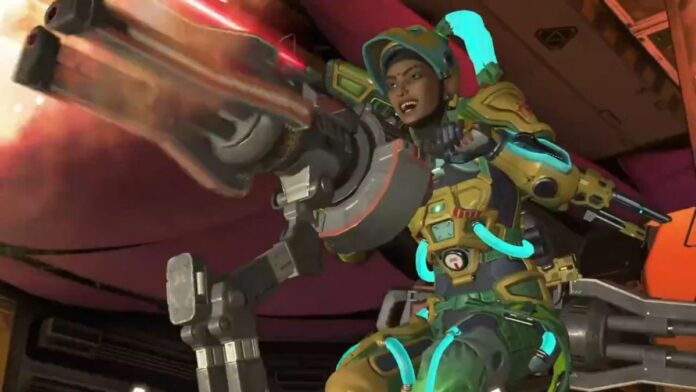 Apex Legends’ foul-mouthed mechanic Rampart is the star of next week’s Evolution Collection Event, crashing a land cruiser into World’s Edge and gaining some sorely-needed buffs.

Evolution’s new Town Takeover (character-specific themed areas) will be starting next Tuesday, September 14. This rolling shop, nicknamed Big Maude, features vending machines that allow you to purchase fully-equipped weapons at different tiers. A paintball course is also available just outside the parking lot. However, it seems that this might be a more deadly setup.

Evolution also grants Rampart an heirloom in form of a great wrench. But it seems like she’s had a few tune ups. Rampart, one of the less dynamic Legends, has been in dire need of a rework. Now she will get one in the shape of a more versatile gun.

The ultimate, Sheila can now be used as a hand-held minigun. Although it will take longer to spin up and only has one mag, you can still set it down at any time (though it is down forever).

Rampart’s takeover doesn’t just apply to battle royale. Rampart’s Arenas Extravaganza mixes up arenas with special weapons at a discounted price. Evolution is a collection event that includes new skins. This allows you to paint Wraith and Octane in stunning neon outfits.

Evolution will be available for two weeks starting next Tuesday, which marks the halfway point of the current season. The Evolution patch will also mark the end of fan-favourite movement method, although some players have managed even greater velocities using private, modified servers.