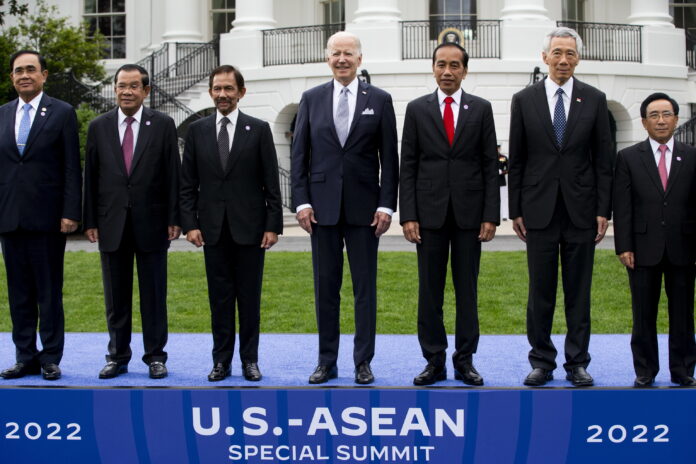 Recover the ground lost with Trump in favor of China in a key region in world trade where more than 600 million people live. Since Joe Biden entered the White House, this has been the priority objective of Washington’s foreign policy; redirect the old alliances in Southeast Asia.

Beneath the economic facade and the traveling of emissaries from one place to another, the purpose is to assemble a united front against the increasingly extended power of Beijing throughout the world. Likewise, surrounding the rival by strengthening alliances both with its neighbors to the south and with the powers of the Pacific (Japan, South Korea and Australia), is the strategy in place every time the US administration lifts its sights from the war in Ukraine.

This Thursday and Friday the leaders of the Association of Southeast Asian Nations (ASEAN) traveled to Washington, which Biden considers a key bloc to face the rise of China, which is also the largest economic partner in the region. For now though, ASEAN countries are keeping their distance from siding with Washington in its fight with Beijing, due to their reliance on Chinese trade and investment, and because US economic incentives are comparatively limited.

The US president has hosted a summit that marks the first time that ASEAN leaders have met as a group at the White House and their first meeting organized by a US president since 2016, when they met with former President Barak Obama. in California. The leader of Burma, General Min Aung Hlaing, excluded for his coup in February 2021, and the president of the Philippines, who is in the midst of a transition of powers – from Rodrigo Duterte to Ferdinand Marcos Jr. – after last Monday’s elections.

After the first meetings, in which the Speaker of the House of Representatives, Nancy Pelosi, the Secretary of State, Antony Blinken, and the Vice President, Kamala Harris, have also participated, the United States has offered a package of 150 million dollars to the 10 countries that make up ASEAN – each with very different interests to protect – for various initiatives ranging from maritime cooperation to clean energy. Six months ago, China also promised a strong stimulus to its neighbors to support economic recovery after the pandemic, but the sum amounted to 1.5 billion dollars.

The Biden administration has said that the largest distribution would be $60 million to “promote a free and open Indo-Pacific,” a recurring phrase from Washington leaders that newspapers that speak for the Chinese Communist Party often translate as the creation of a “NATO in the Indo-Pacific against China”.

That promised money, according to the White House, will allow the US Coast Guard to allocate more resources to “security training and cooperation” in a region where four ASEAN members (the Philippines, Vietnam, Malaysia and Brunei) have disputes with Beijing over various islands in the South China Sea. The Coast Guard will also deploy a ship to the region to help local fleets counter what Washington and some Asian nations describe as China’s illegal fishing.

The rest of the money will be used to “support digital innovation, fight Covid-19 and airborne diseases in Southeast Asia, and clean energy development.” Pulling out his wallet, Biden tries to make amends for former President Trump’s withdrawal from the Trans-Pacific Partnership in 2017, a free trade pact in the region that excluded China, and non-adherence to the Regional Comprehensive Economic Partnership (RCEP), the treaty largest free trade agreement in the world, signed by 15 countries and involving almost a third of the world’s population.

“We are not asking countries to choose between the United States and China,” a senior Biden administration official said before the summit began. They don’t see it that way from Beijing. On Thursday, Chinese Foreign Ministry spokesman Zhao Lijian warned Washington not to “harm” regional peace and unity.

“The United States should not use cooperation as a cover to pressure others to take sides, or play with fire on issues related to China’s core interests,” said Zhao, who has also accused the United States of trying to provoke a race. arms race in Asia-Pacific. From the Asian giant they are increasingly sharpening their criticism, while Biden prepares to cross the pond and travel next week to South Korea and Japan, two key allies in the new Cold War starring the two strongest economies in the world.