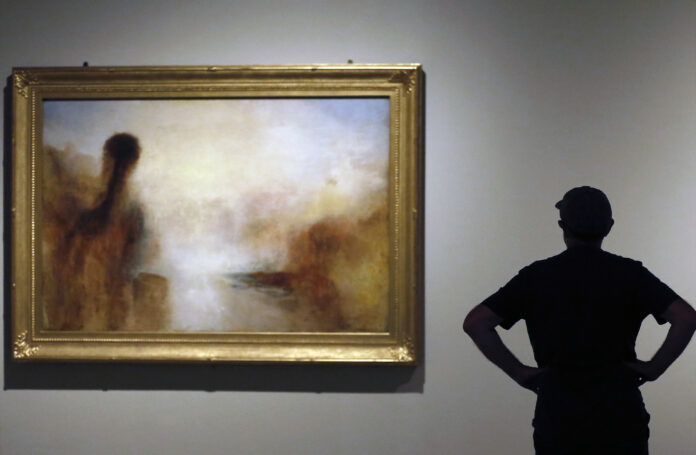 It had been more than a decade, since the exhibition dedicated to him by the Prado Museum in 2010, that so many paintings by Joseph Mallord William Turner (1775-1851), the “great painter of light”, could not be seen in Spain. The Barcelona-based Mnac, in collaboration with the Tate, now dedicates Turner to him. Light is color, which brings together a hundred paintings, watercolors and drawings that condense his extraordinary passion for nature and atmospheric phenomena. The exhibition is a feast of storms, rainbows, sunsets, clouds, turbulent skies, mists and sunrises. There is even a fabulous snow avalanche, painted on the Alps.

“Turner was not a particularly modest man, he was well aware of his enormous talent,” explains curator David Blaney Brown, former Chief Curator of Historical Art at the Tate and responsible for years for the enormous legacy that Turner donated to the British government. This explains why, of the 35,000 pieces that make up his legacy, there are around 400 oil paintings and thousands of notes, preparatory drawings and study watercolors, unfinished works that Turner did not conceive to be exhibited in public but that he made sure to keep and put in good order. collection. The exhibition is an interesting mixture of finished canvases and sketches, a “double dynamic” that for Blaney is a “privilege” because it gives access to a much more “private” and experimental dimension of his work.

“Turner was interested in finding new ways of looking at things, and he would often do these little drawings or watercolors to remember what he had seen, experience and memorize what he had felt, and then use it,” he says. It was not uncommon for years, sometimes up to a decade, to pass between his trips to France or Italy and the rendering of what he had seen in his impressive oil paintings. Despite their preparatory character, the studies are equally wonderful, such as the study sketch of Lake Petworth at sunset or the Margate watercolors. Among his oil paintings, works such as The Golden Branch or Apullia in search of Apullus, both with mythological airs, New Moon or the spectacular Venice Festival stand out.

“Among art historians at the end of the 20th century there was a redoubt that came to consider him an abstract painter or an impressionist without knowing it, ahead of his time,” says the curator, something with which the director of the Mnac, Pepe Serra, agrees: “He was a 19th-century Mark Rothko without him knowing it.” “But we have to remember that he did not expect to be judged by many of the pieces in this exhibition. And that abstraction is usually the removal of meaning from a work, and Turner’s is full of emotion,” says Blaney.

Although the sublime, the immensity of the landscape and the intensity of the forces of nature were his favorite themes, Turner was always an interior painter, and that relationship between memory, imagination and recreation is one of the axes of The exhibition. The exhibition also focuses on how the British reflected the effects of the Industrial Revolution on the landscape and nature: there are steam, smoke and that new type of fog caused by pollution in, for example, Espigón?, with a steamboat on the sea in the distance.

Lovers of the painter may remember Mr Turner, the biopic directed by Mike Leigh in which Timothy Spall got into the skin of the artist in his last 25 years of life. One of the legends about the romantic painter was recreated there, the one that says that he had the mast of a ship tied up in the middle of a snowstorm to experience it in all its harshness. Blaney Brown does not believe that the anecdote is real, but he does believe that his last words on his deathbed, in a room overlooking the Thames, were: “The Sun is God.” The exciting final section is dedicated to the search for how to represent his light, with resplendent canvases of divine airs such as Going to the dance, Fleet setting sail or Sunset from the Rigi.

Also until September 11 and as a complement, the Mnac hosts the exhibition The heartbeat of nature, a selection of 80 works from the museum’s own collection, mainly drawings, which delves into the importance of nature in Catalan art in the 19th century with works by Jaume Morera, Marià Fortny or Lluís Rigalt.