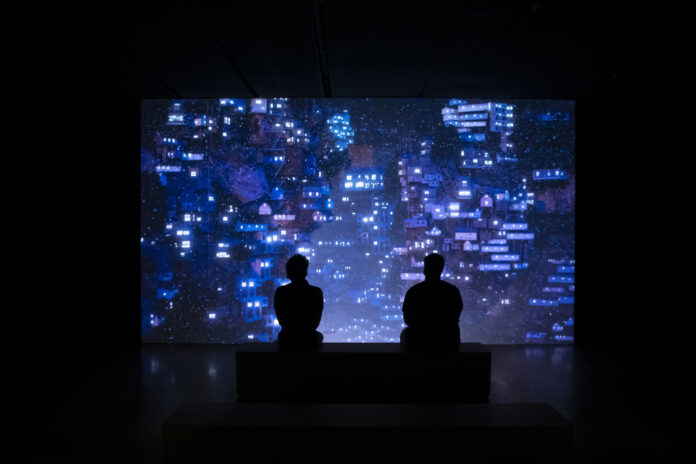 Part filmmaker, part urban planner, part environmentalist, part narrator… A complex explanation is needed to define the work of Australian Liam Young, who is exhibiting the exhibition Building Worlds, a hypothesis for the future of humanity that Young divides into six chapters.

The central premise is simple: Young imagines a city of 10,000 million inhabitants, the entire population of the planet when it reaches its demographic cap, built with remnants of our world already built and concentrated in a landmass equivalent to that of the United Kingdom. The rest of the planet, in this approach, 98% of the planet’s surface, would be freed from the harmful action of human beings, ready to regenerate it.

What is the use of such a project, half science fiction and half academic work? In Constructing Worlds, Young talks about the relationship between architecture and technology through six utopian-documentary films. “We have six stories about different futures, the challenge is to find out how these stories can explain what we are today, can catalog all the crises, all the hopes and all the dreams that we have today. We try to think of a new way of revelation”, Young tells.

“The best science fiction isn’t about the future, it’s about the present,” Young continues. “1984, by George Orwell, is not about 1984 but 1948, the year it was written.” The key to transcending, as Orwell did, is to use in Building Worlds the most realistic elements possible for that imagined future that explains the present. “Now, we’re creating our picture of the future, connecting the real science, the real technology, the real trends of every day, of our present. And looking at how they might act differently,” says Young.

Some examples: drones, smart cities, artificial intelligence, autonomous vehicles, global climate change… These are the ‘characters’ that define his films. And all of them, focused on the same idea: undo the technical-scientific one and find a friendly coexistence between technology, human life and the salvation of the planet.

“For example, the movie In the robot skies looks to a near future based on drones. Teenagers hacked the drone network to send love letters and woo each other. The idea is to resignify drones so that they become cultural objects, not just military,” says Young.

After analyzing the six episodes of Construir Mundos, Young proposes in his epilogue, Emissary (an extension of the project he has created for the Telefónica exhibition) a “golden satellite” that would provide proof of the existence of human beings in Earth for a lonely future. Because the architect believes that, despite the solutions that he develops in his work, the human being is heading for extinction.