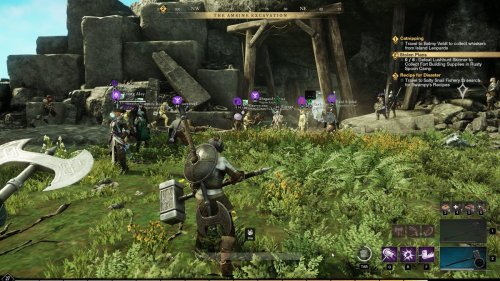 A new AFK detection technology is being developed to reduce strain on servers that are already overloaded.

Amazon’s New World MOM is still huge. It surpassed 913,000 concurrent users Sunday night. This means that it can still be difficult to get in the game. Amazon has made changes to its AFK detection software to detect and boot “bad faith” AFK players to ease some of the pressure.

Amazon has not yet specified the length of New World’s AFK-timer, which is the time limit for players to remain idle before being kicked out. However, we tested the game shortly after launch. A notification will appear in top-right corner of your screen after 20 mins of inactivity. If you are still doing nothing after that, you will be ejected from the main menu and any overcrowded queues.

Some players have found ways to get around the AFK detection and still play the game. As people take up spaces they aren’t actually using, servers become artificially full.

HardcoreHenry, community manager for New World wrote that there has been a lot frustration with individuals who are artificially maintaining their activeness in servers to bypass the automatic AFK mitigation built into New World. We agree that this behavior is unacceptable, especially considering the number of people who wait patiently to enter a world. We have a new way to identify bad faith AFK players and take action.

We won’t reveal the exact details of the solution, but we can say that we are confident that New World players will experience no problems. Our detection system will initially kick you to the main menu. If the behavior continues, harsher penalties will be applied.”

The New World Twitter feed announcement received a less enthusiastic response than you might expect. Most of the responses complained that the problem isn’t AFK abusers, but a shortage of server capacity and long queue times. Many say this is why they log in instead of logging out. Some players also want a grace period for reconnecting to the game. This would allow them to skip the long queues and get back to the game immediately.