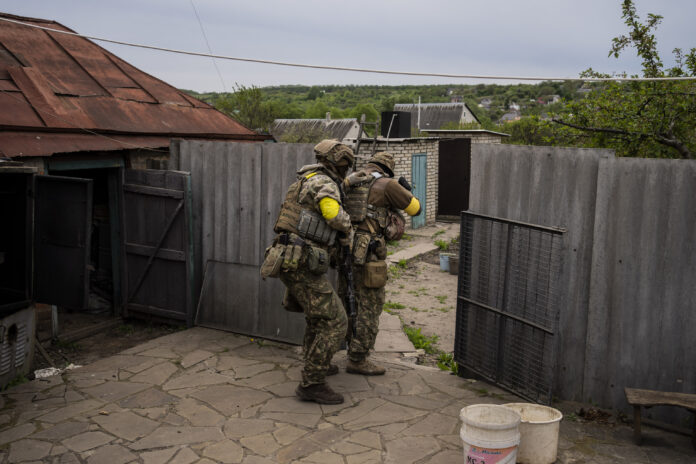 Ukrainian government and military analysts agree: the Russian army is no longer an imminent threat to the country’s second largest city. In recent days, Ukrainian forces have managed to push their enemies beyond the boundaries of the Kharkov municipal area, almost seizing a stretch of the international border with Russia. An achievement that puts the alleged Russian strategy of expanding throughout eastern Ukraine on the ropes.

The chief of the General Staff assured this Saturday that, after weeks of intense bombing of the city, the Russians are withdrawing from Kharkov and, instead, concentrating on controlling the supply routes of the Ukrainian east. Its activity now consists of launching artillery fire and aerial bombardment against Ukrainian positions in the Donetsk region to “exhaust the Ukrainian forces and destroy their fortifications.” Moscow’s stated goal remains to occupy the entire historical region of Donbas.

According to Ukraine’s Defense Minister Oleksii Reznikov, his nation “is entering a new and long phase of the war.” Mike Martin, one of the most renowned scholars of this armed conflict, agrees with this vision. “Over the last week we have seen how the Russian forces begin to culminate in the east and south of Ukraine,” he explains in one of his tweets. “That is, they’ve gone from being offensive to being defensive.”

Consequently, explains Martin in a series of tweets posted on Twitter, it is now the Ukrainians, more motivated than their rivals and with arsenals full of weaponry provided by Western countries, who are taking the lead on the battlefield. Martin points out two key points where this turn of events can be seen: Kharkov and Kherson, one of the first towns occupied by the Russians but whose surrounding territories are becoming smaller.

Military sources on the ground tell EL MUNDO of the good humor among the soldiers who support Ukraine. The course of events is such that the head of Ukrainian military intelligence, Major General Kyrylo Budanov, told the British channel Sky News on Saturday that the war in Ukraine could reach a “turning point” during the month of August, and end in Russian defeat before the end of the year. Budanov acknowledged himself “optimistic”.

It is not for less. In a few weeks, the Ukrainians have won the battle for kyiv and, apparently, claim victory in Kharkov. According to witnesses, in recent days the artillery fire on the city has been almost non-existent. The biggest blow against Russian aspirations this week has taken place on the banks of the strategic Siversky Donets River. A Russian attempt to build a pontoon to penetrate Ukrainian territory ended with 73 tanks destroyed, according to Ukraine. This river can become a new natural border for the territories occupied by Russia. Ukraine wants to prevent it.

There are other less optimistic forecasts: “President Putin is preparing for a prolonged conflict in Ukraine,” warned US Director of National Intelligence Avril Haines, during an appearance in the Senate this week. The unknown in the equation in this phase of the war is, precisely, what is going through the head of the Russian head of state. During this month he has feared both the spillover of the conflict into neighboring Moldova and, more recently, into Finland.

Few doubt the need to maintain contacts with the Kremlin. This dialogue is what has allowed the evacuation of all civilians from the Azovstal plant in Mariupol, the last redoubt of the coastal city controlled by Ukraine. Now, kyiv is trying to get wounded soldiers out of the compound, where heavy fighting is still taking place. “We ask the UN and the Red Cross to show their humanity and reaffirm their basic principles,” a Ukrainian brigade member implored from the battlefield this week. Both entities have been key in getting innocent victims out of Mariupol.