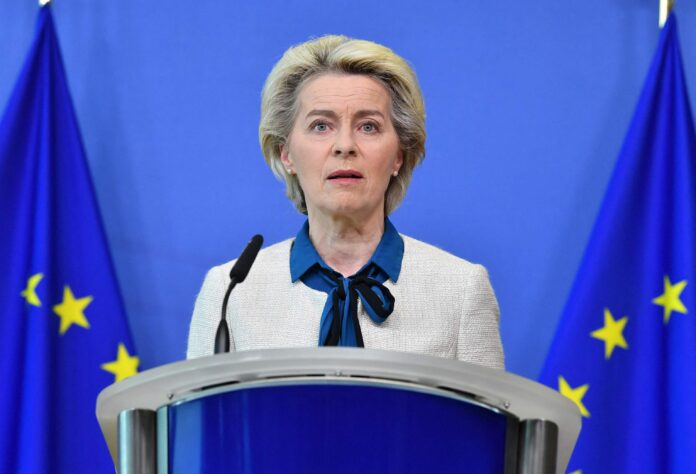 The European Commission has proposed this Wednesday an emergency economic aid program for Ukraine worth 9,000 million euros in this course, a line of credit so that the country can meet its most urgent expenses and obligations.

“Ukraine is on the front line and defends European values. We will continue to stand by them during this war and as they rebuild their country. Today we propose to complement the significant short-term relief provided so far with new exceptional macro-financial assistance of up to €9 billion. in 2022, President Ursula von der Leyen said after the meeting of the College of EU Commissioners.

The finance ministers of the G7 analyze precisely today the situation. The Zelensky government has communicated that its economy shows a negative monthly balance of around 5,000 million dollars, and the idea is that the large economies temporarily cover at least three months, to allow relief, that the country does not collapse and the defense military resist. The International Monetary Fund has estimated Ukraine’s balance of payments imbalance through June at approximately €14.3 billion.

“We have to think about the day after for the broader reconstruction effort. The EU has a responsibility and a strategic interest to lead this reconstruction effort. EU leaders invited us to reflect on this at their meeting in Versailles and that It is what we have done. The principles of reconstruction must combine investment with reforms and over time, they will support Ukraine in exploring its European path”, said the German. She had already talked about a mechanism similar to that of the European Covid funds, which links disbursements to milestones and reforms. And the president presents it as a long-term exercise, with the previous work to be able to enter the EU in the future, when all the requirements are met.

“It must be a future-proof plan, fully reflecting the needs identified by Ukraine. The plan would address key reforms in areas such as anti-corruption, administrative capacity, rule of law and independence of the judiciary. And it must be firmly anchored in the green transitions.” and digital and fundamental European values. But, of course, the EU would not and should not be the only one contributing to this effort. That is why we propose a reconstruction platform as part of this plan led jointly by Ukraine and the Commission and bringing together to EU Member States, other bilateral or international donors, international financial institutions and other like-minded partners. The aim of this platform would be to agree on the direction of the journey and ensure maximum synergies of all efforts. These investments will help Ukraine to emerge stronger and more resilient from the devastation caused by Putin’s soldiers,” added President tooth.

Since the war began, the EU has mobilized around €4.1 billion to “support Ukraine’s overall economic, social and financial resilience in the form of macro-financial assistance, budget support, emergency assistance, crisis response and humanitarian aid” explains the Von der Leyen team. “Military assistance measures have also been provided under the European Peace Fund worth €1.5 billion “to be used to reimburse Member States for their in-kind military support to Ukraine, and the mobilization of an additional 500 million.

The Commission’s proposal is to sign loans that would be paid in tranches with very long maturities and favorable interest rates thanks to the guarantee of the Union budget. For this to be possible, “the Member States must agree on the availability of additional guarantees”, just as it was done for the Commission to go out to the markets to issue joint debt for the Next Generation program after Covid.

“An international coordination platform, co-led by the Commission and the Ukrainian government, would function as an overall strategic governance body, responsible for supporting a reconstruction plan, drawn up and implemented by Ukraine with the support and administrative capacity and technical assistance by part of the EU. It would bring together partners and supporting organizations, including EU Member States, other bilateral and multilateral partners and international financial institutions. The Parliament of Ukraine and the European Parliament would participate as observers,” said the statement issued today. in Brussels. That platform would choose the most appropriate destination for the funds and would supervise their proper use.

“To support the reconstruction plan, the Commission proposes to establish the “RebuildUkraine” mechanism as the main legal instrument for the support of the European Union, through a combination of transfer and loans. It would be integrated into the EU budget, guaranteeing thus transparency, accountability and sound financial management of this initiative, with a clear link to investments and reforms It would build on the EU’s experience under the Recovery and Resilience Facility, but be tailored to the unprecedented challenges of rebuilding Ukraine and accompanying it on its European path. The Fund itself has a specific governance structure that would guarantee full ownership of Ukraine,” the document says, stressing that the EU’s focus will be on the fight against corruption and guarantees of the rule of law.

Since 2014 and until the beginning of the Russian invasion, the EU had already given 1,700 million in transfers to Ukraine under the European Neighborhood Instrument, 5,600 million in five loan programs, 194 million in humanitarian aid and 355 million euros in instruments of foreign policy. Since 2014, the European Investment Bank and the European Bank for Reconstruction and Development have mobilized more than €10 billion in loans to Ukraine and in recent weeks, the EIB has disbursed €668 million to the Ukrainian budget.