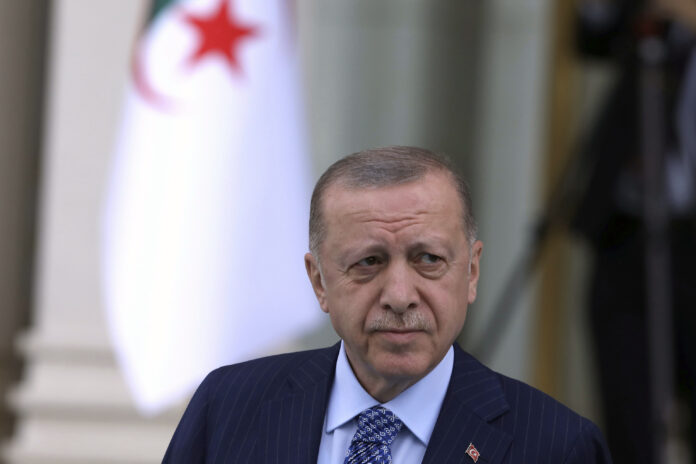 The Turkish president has thrown another bucket of cold water on Finnish and Swedish intentions to join NATO. This Monday night, at a press conference, Recep Tayyip Erdogan called Sweden an “incubator of terrorist organizations”. After a weekend of intense meetings in Germany between the Turkish Foreign Minister and his counterparts from both countries, and given the express desire to send delegations to Ankara to talk, Erdogan replied sparingly: “Don’t bother.”

“Will they come to persuade us? Do not bother. First of all, in this process we would not say ‘yes’ to those who impose sanctions on Turkey,” Erdogan asserted, taking the floor next to the Algerian leader, Abdelmajid Tebboune. In this case, the Turkish leader was referring to the suspension of the shipment of weapons that Sweden imposed on him in 2019 -and tried to extend to the entire EU-, due to a military operation in northern Syria, during which Turkey occupied a controlled area by Syrian Kurdish militias.

Where the Swedes see an attack with multiple human rights violations, Ankara sees an action necessary for its national security. The Kurdish-Syrian guerrillas are made up of members of the PKK, a Kurdish-Turkish force that, under another name, the US and the EU used as a battering ram against the Islamic State but which, at the same time, remains on their lists of “terrorist groups”. The Turks, who have been at war with the PKK for four decades, have repeatedly denounced this situation.

Now they want to be heard. Or rather, they want to take advantage of the situation to unroll a list of historical grievances. Because, just as they have used multiple formulas to express their opposition to Sweden and Finland, but without announcing a definitive ‘no’ -full consensus is necessary for their entry into NATO-, the Turks have also not said exactly what they want in exchange for its green light. Since Saturday they have floated several demands, without concentrating on any of them.

The Turkish network TRT reported this Monday morning that the two candidate countries had rejected 19 Turkish demands for the extradition of suspected terrorists and had left five unanswered. Besides, nine more are pending evaluation. The people targeted by Turkey are linked to the PKK or to the brotherhood of the preacher Fethullah Gülen, a former ally of Erdogan accused of orchestrating the failed 2016 coup.

It hasn’t always been a ‘no’. In April 2020, Sweden denied asylum and handed over to Turkey Resul Özdemir, a PKK member sentenced in absentia to 15 years in prison. However, this Monday, the Turkish President again attacked the asylum system of both countries, which for years has granted safe refuge to people who have fled Turkey for political reasons. “They go to their parliament and allow them to speak. They even have para-terrorists in their parliaments,” Erdogan denounced.