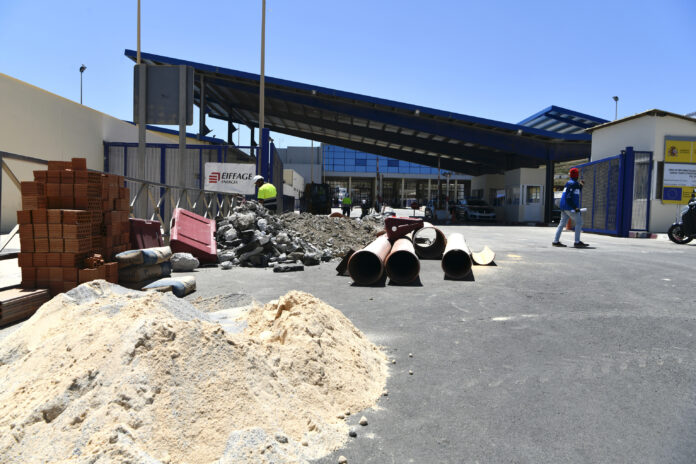 The Tarajal border in Ceuta finalizes the preparations for its reopening when it is 00:00 hours on Tuesday, May 17, as announced by the Minister of the Interior, Fernando Grande-Marlaska, last Thursday. The reform and adaptation work continued this Monday a few hours before the opening. Some retractable pivots have been installed that would prevent a possible entry of cars with the intention of perpetrating “a terrorist attack or an attempt to enter by force through the border crossing”, according to sources from the Government Delegation in Ceuta.

In addition, they are finishing placing new canopies in the pedestrian accesses and roofs for the sun protection of border agents. Outside, workers from the autonomous city were working to fine-tune all the urban furniture located next to the entrance, preparing the medians that separate the lanes in the two directions. This Monday the arrival of the machines for the asphalting of the road that will give access to the border control posts, which will end up arranged in two lanes in the direction of Morocco and three to enter Spain, was scheduled.

The automatic people control systems, the so-called intelligent border, will not be operational yet and it is expected for mid-June, as is the wish of the Government delegate in Ceuta.

When the opening is already effective, the entry of residents in the province of Tetouan without a visa is not allowed, as until now included in the exemption rule to the Schengen treaty, which allows the entry of residents of the neighboring cities of the province of Tetouan and Nador to the autonomous cities of Ceuta and Melilla, but that prevented them from traveling to the peninsula.

Cross-border workers with documents in order, estimated at more than a hundred, will only be able to cross from Tuesday, May 31, as stated in the decree opening the Spanish land borders.

The Moroccan press treats the reopening of the borders as symbolic in this first phase, the duration of which has not yet been determined. This symbolism to which some media from the neighboring country refer does not see it as a coincidence that the date of the reopening agreed by the two countries coincides with the anniversary of the migratory crisis that Morocco caused by facilitating the entry of more than 12,000 people through the breakwater of access to the Tarajal beach in Ceuta.

But before the reopening of borders, Spain and Morocco still have to agree on two important points: commercial customs in Melilla and the creation of a new one in Ceuta which, according to the words of the Spanish Foreign Minister, José Manuel Albares, It will be a reality sooner rather than later. A statement that coincides with the roadmap that the governments of both countries are going to follow after the meeting in Rabat between Pedro Sánchez and Mohamed VI after the recovery of bilateral relations cut short in March last year, which led to a diplomatic crisis for the hospitalization of the leader of the Polisario Front, Brahim Ghali, in a hospital in Logroño.

The Government Delegation in Ceuta has reported at a press conference on the conditions for opening the border on Monday night. Thus, the Government delegate in Ceuta, Salvadora Mateos, has announced that for the next 15 days the Tarajal crossing will open for people and vehicles (only Spanish nationals and residents in the EU or with a Schengen visa), without allowing the passage of merchandise from Morocco – “not a bag of tomatoes” – nor in the passenger regime, the head of Foreign Health of Ceuta has sentenced in the same appearance.

This measure is the same that Morocco will adopt as long as the conditions are not met for the possible opening of a commercial customs office that will come out of the bilateral commission between the two countries, in accordance with the roadmap to be followed between Spain and Morocco after the normalization of relations between the two countries after Pedro Sánchez’s visit to Rabat.

Mateos has appeared together with those responsible for the National Police and Civil Guard, Commissioner Noguerales and Colonel Domínguez, and has broken down the phases of the “gradual and orderly opening” of the Tarajal border as published by the BOE last Saturday.

For its part, the Ministry of the Interior has reinforced the units of the National Police Corps (CNP) to guarantee security at border facilities, with members of the Police Intervention Unit (UIP) and with the arrival of Immigration agents for the Control entry and exit of people.

In phase 1, those people who can access the Schengen area, that is, Spaniards, Europeans and Moroccans with a visa to move around the EU, will enter Spanish territory. For those who leave Ceuta there are no restrictions, whether they are Spanish or Moroccan.

The Jucil association, whose national representatives are visiting Ceuta, has demanded that the Government of Spain increase the number of civil guards to “control the border crossing” with the help of electronic measures such as license plate recognition and facial identification, something that the Government plans with the implementation of the “intelligent border”. Jucil also calls for the creation of a special unit to monitor the fence with enough material to repel attempts at “immigrant assaults”, according to the secretary general of the Professional Association, Ernesto Vilariño, who has made it clear that they are here “to support and support the work carried out by the troops”

Coinciding with the anniversary of the migratory and humanitarian crisis, the representatives of Jucil have denounced that they observe “with concern that the situation has practically not changed at all: there are still no civil guard reinforcements at the Tarajal border crossing, the fence continues to be unprotected and none of the promises made by the Home Secretary after the assault have been kept.”

The Government delegate has stated in this regard that the lack of troops demanded by the association of civil guards does not conform to reality, “as you will be able to verify tonight”, referring to the device mobilized for the opening of the border.

On the other hand, the visit to Ceuta of the president of the PP, Alberto Nuñez Feijóo, has been announced this Tuesday, coinciding with the opening of the border crossing and the anniversary of the May crisis. Feijóo will be received by the president of Ceuta, Juan Jesús Vivas, and is expected to meet with representatives of the city’s business fabric and the State Security Forces and Bodies.

According to the PP in a statement, the visit of the president of the Popular Party is part of the objective of ratifying the “absolute commitment” of the PP with Ceuta and Melilla as a “space of coexistence between cultures, whose Spanishness can never be questioned” .