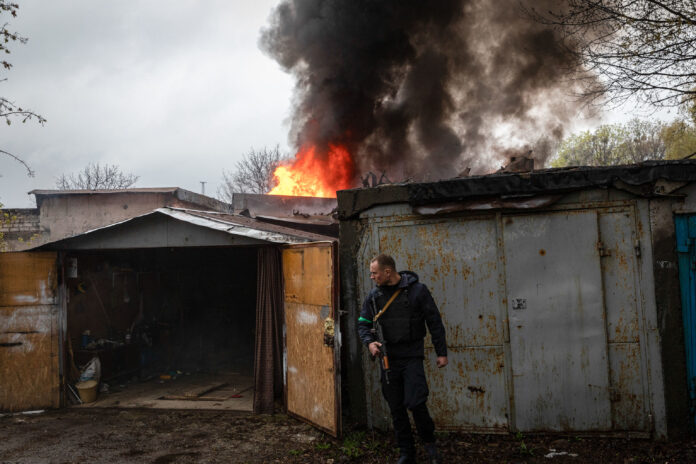 On March 18, between the cities of Poltava and Kharkov, a column of 10 Russian tanks and their crews withdrew from the front line to an area occupied by Moscow to re-municate and repair damage. In the middle of a single lane road, with trees on either side, they came under a hail of anti-tank fire that blew out their armor and sent survivors running across the field. Minutes later, a group of Ukrainians over 50 years old, many mixing uniforms with civilian clothes and some with hunting weapons, took victorious selfies with the burning junk in the background.

Also in the Kharkov area, another group captured 29 Russian soldiers relaxed in their makeshift camp. And another guerrilla, known as the “unknown patriots”, has become strong around Melitopol, where they killed 70 Russian soldiers on April 12 before going into hiding. The Institute for the Study of War (ISW) assures that these actions “are forcing the Russians to dedicate more resources to defending their rear.” But is it possible to defend such a large territory without neglecting the front?

The one in northern Poltava was the first recorded major partisan attack on the Russian occupied zone since the war began. General Kyrylo Budanov, Ukraine’s intelligence chief, announced two weeks ago that “the season for guerrillas to go on safari” was coming. “Now is when a new scenario begins for the Russians: how to survive,” Budanov said. Since then, the resistance of the so-called “territorial defenses” has multiplied. They are not random assaults, but ambushes in which several groups participate at the same time, some reporting, others moving weapons from hiding places and the latter attacking.

These attacks have little military value, but high morale if the occupying army begins to feel really harassed. Infiltrations into the enemy zone have not only been carried out by civilian partisans, but also by elite Ukrainian troops. Armed with US-supplied night vision goggles, they attacked several camps outside kyiv during the early stages of the war, plunging poor Russian morale.

The last phase of these ambushes is to send the Russian military Telegram groups photos of those killed and captured in guerrilla operations to send the right message: “You won’t be able to sleep until we kick you out of Ukraine,” he insists to this journalist. one of the members of these territorial defenses who are all over the country as a message to the Russians.

The objective of these units is to cause panic beyond the Russian lines. Many of them hide in the woods and only come out to attack supply lines, weapons depots or command posts. It is the same strategy that Winston Churchill put in place in 1940 to carry the war beyond German lines with sabotage, targeted assassinations and coups. Its spearhead was then the SAS (Special Air Service) which, curiously, has been deployed in Ukraine according to the British newspaper The Times to instruct Captain Yuriy Myronenko’s recruits in the commando techniques that made this unit famous in the deserts of Libya against the German Afrika Korps.

Ukraine is a country with a great partisan tradition, as evidenced by the networks of tunnels and bunkers built throughout the country from 1941 to 1956. The Ukrainian Insurgent Army (UPA) with some 100,000 volunteers fought the Nazi occupiers and later the Stalin’s troops. Its flag is red and black, which are the colors resulting from putting a Ukrainian flag (blue and yellow) in a bloodbath. Today, Ukrainian partisan units have recovered the symbol and display it proudly at every checkpoint.

These acts of sabotage are not only being seen inside Ukraine. this Friday a large explosion blew up the building of the Dmitrievsky chemical plant, about 300 kilometers from Moscow, the same day that the Russian Aerospace Research Institute on the outskirts of Moscow also appears in flames in which land missiles were developed air and ballistic missiles. Is it Ukrainian attacks, coincidental accidents, Russian false flag maneuvers, or sabotage by anti-Putin Russians? We may never know.

What we do know is that yesterday, Thursday, one of the media outlets that serve as the Kremlin’s transmission belt (Readkova) published a statement from the Russian Ministry of Defense in which Moscow recognized 13,414 dead so far plus 7,000 missing. Huge figures that are close to the count made by the Ukrainians and that seemed too optimistic for their interests. Now we see that his calculations are much more accurate. In the same news, reference is made to those who died in the sinking of the Moskva: 116 dead and 100 missing, another huge disaster that has not yet been communicated to the families of these sailors, just as it happened with the victims of the Kursk submarine. Shortly after this document disappeared from the web page of said medium. Later, the Kremlin detained the commander of the entire Black Sea fleet, Admiral Igor Osipov, in another of its recurring purges of him when things go wrong.

On the Donbas front, Russian troops continued this Friday to advance very slowly south from Izyum and east from Kremina and Popasna, but at a high price. Once again the Russians, after a brutal artillery preparation that destroys cities prior to the assault, progressed by road with armored columns, in broad daylight: a bargain for the Ukrainian precision artillery and its observation drones. In one of these actions, three days ago, the resistance destroyed 22 BTR armored personnel carriers. A day later, six T-72 tanks. In total, since the invasion began, the defenders have killed 3,082 Ukrainian armor, of which 530 are tanks corroborated by open source observation.

On the southern front, once again the work of the satellites revealed possible Russian war crimes by detecting, in Mariupol, large mass graves that could house, according to the mayor of the city, up to 3,000 civilians due to their size, about 20 times the grave of Bucha in which 300 people were found.

Yesterday many specialists in degenerative diseases analyzed the video in which Putin meets with his visibly aged Defense Minister and with movements that denote a certain paralysis. Some experts pointed to his little-disguised attempt to keep his left hand under control, perhaps due to a Parkinson’s attack, according to those sources. The last dictator who was the victim of a similar ailment, in the same hand, was Adolf Hitler.