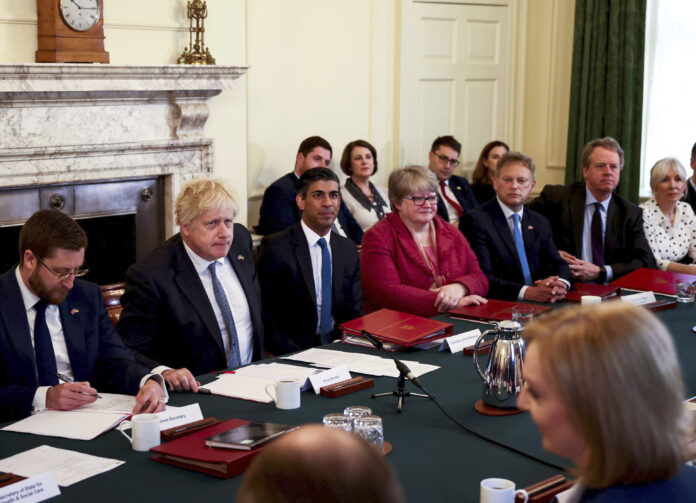 “Unilateral actions that contradict an international agreement are unacceptable” and, if they occur, they will respond “with the measures available.” The European Union has been systematically repeating this phrase, this idea, this basic principle of global relations and diplomacy for more than three years, but the United Kingdom, once an example of credibility and respect for the law, has once again decided to turn a deaf ear. To the complaints of its former members of the Union, to international law and to the commitments acquired.

The British Government has confirmed that, in the coming weeks, it will adopt legislation to destroy the Northern Ireland Protocol, that is, the mechanism created after years of negotiations to try to make Brexit as painless as possible in Northern Ireland and that the Good Friday agreement does not blow up. It is an instrument that has proven useful, since it has avoided hard borders since the United Kingdom left the EU, but it has costs and consequences. More difficulties in trade, fees, controls, paperwork.

Northern Irish authorities and businesses have gotten used to it, and while they have always said they would prefer a few tweaks to make everyday life easier for citizens and companies, there is absolutely no appetite for a draconian decision. London, on the other hand, has been relying on that exit, that smoke screen, for months. And the result of the elections, which gave Sinn Féin a majority for the first time, was the excuse.

“The announcement by the UK government to introduce legislation that would no longer apply the constituent elements of the Protocol raises significant concerns. Firstly, because the Protocol is the solution agreed between the EU and the UK to address the challenges that raises the UK’s withdrawal from the EU for the island of Ireland and to protect the hard-won gains in the peace process.Secondly, because the Protocol is an international agreement signed by the EU and the UK. Unilateral actions that contradict an international agreement are not acceptable Thirdly, because the Withdrawal Agreement and its Protocol are the necessary basis for the Trade and Cooperation Agreement, which the EU and the United Kingdom have agreed to organize their general relationship after the withdrawal of the United Kingdom”, reacted Commissioner Maros Sefcovic, responsible for negotiations with London after Michel Barnier took charge gara of all part of the divorce.

In a statement published this Tuesday, Sefcovic has charged against Boris Johnson’s decision, but taking care of the language and tone. Nothing is lost yet and he hopes to redirect the situation. The EU has shown its waist and patience on infinite occasions, it has allowed changes, tweaks, adjustments such as the one that affects medicines, which according to the negotiation could not flow as before, but for which an exception has been made. But it is never enough for London, which once again reneges on what was signed.

Johnson’s position is clear: ‘we don’t like it, so we change it, regardless of what was agreed’. They thus want to force a change in the EU, which is holding a European Council in two weeks in which the leaders of the 27 may be forced to address the issue. British Foreign Secretary Liz Truss has made it quite clear to Westminster what they are looking for.

“The challenge is that this solution requires a change in the Protocol itself, as its current wording prevents it from being implemented, but the EU mandate does not allow the Protocol to be changed,” he said. That is: they want the 27 to change the mandate of the Commission’s negotiators to implement changes, but in the EU there is no appetite, no one wins and there is, every time, more boredom. There are much more serious concerns, starting with the war in Ukraine. The Irish question seemed about to explode in November, it calmed down but now it returns with force after the elections.

“If the UK decides to go ahead with a bill disabling the constituent elements of the Protocol, as the UK government announced today, the EU will need to respond with all measures at its disposal. Our overall aim is to find joint solutions in the framework of the Protocol. That is the way to ensure legal certainty and predictability for people and businesses in Northern Ireland,” the commissioner warned.

Arbitration, appeals, infringement procedures and sanctions or replies in the commercial section may be unavoidable if there is no negotiated agreement. Calling into question the bases of the commercial agreement signed after Brexit, but totally conditional on London respecting the agreement, something that deep down it has never had much interest in doing.

The EU could apply the articles of the trade agreement, 770 and 779, specifically, and destroy the current framework, it would be the most drastic option and that would immediately return the tariffs and de facto end much of the bilateral cooperation. It could suspend some specific parts, but it is also complicated and slow. Or, more likely, he could retaliate swiftly at sea, in matters of fishing, for example, something that can be done in a few days.

“With political will and commitment, the practical problems arising from the implementation of the Protocol in Northern Ireland can be resolved. The European Commission is ready to continue to play its role, as it has done from the beginning”, the Commission reiterated, recalling all the flexibility offers it has made during these months, how it has looked the other way every time the United Kingdom missed a deadline, did not apply the promised legislation or unilaterally extended the transition periods, by not being able to put it into practice the complex mechanisms that ensured that they would work on a day-to-day basis.