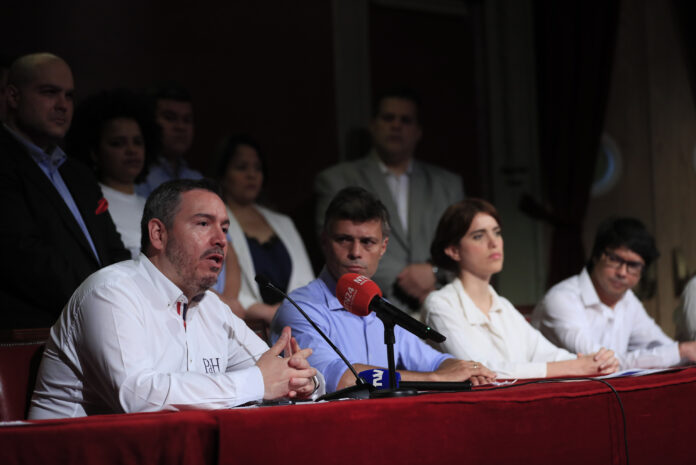 Opponents and activists in Madrid and Miami, two of the cities that have welcomed Venezuelans, Cubans and Nicaraguans in exile, met today in a virtual event to make clear their refusal for the three dictatorships to be invited to the Summit of the Americas. “Wanting to use the participation of regimes as a principle of justice seems totally incoherent to us on the part of countries that are indeed democracies and that do comply with due respect for the principles of the Democratic Charter and international agreements on human rights” , they have underlined through a common statement.

Venezuelan opposition leader Leopoldo López and deputies Sonia Medina and Gilber Caro; Cuban playwright Yunior García Aguilera and art curator Carolina Barrero; and activists such as Ana Margarita Abaunza have raised their voices to support the decision advanced by Joe Biden, against which a good number of countries on the continent, led by Mexico, have taken a stand.

“In recent weeks we have seen blackmail by countries of the Organization of American States (OAS). We expect clear and defined support from all countries,” said López. “Our oppositions are divided, but the dictatorships work continuously,” García Aguilera warned. “If the tyrants are united, let them know that the resistance is also united,” added Barrera, all of them from the Ateneo de Madrid.

Very similar words have been heard in Miami. “The three communities are going to work together to fight against the dictatorships that have repressed our peoples,” declared Ana Margarita Abaunza, president of the Initiative for Change.

“Tortures are not just a story, it is something we are experiencing,” the deputy Medina reminded the continental leaders. Next to her, already in exile, sat the opposition parliamentarian Gilber Caro, one of Chavismo’s “favorite” political prisoners.

An important message that, for the moment, is not heard by the political associates of Nicolás Maduro, Miguel Díaz-Canel and Daniel Ortega. At the head of the “rebellion” against Biden has been the Mexican president, Andrés Manuel López Obrador, who will not attend Los Angeles, site of the summit, in June, and will send his foreign minister, Marcelo Ebrard, as well as the president from Bolivia, Luis Arce.

Both are close allies of the three revolutions. The Honduran Xioamara Castro has also raised the same reservations, as Argentina and Chile, although it is believed that both Alberto Fernández and Gabriel Boric will participate in the conclave.

Other countries, such as Brazil, El Salvador and Guatemala, await events, despite not being part of the bloc of the Latin American left. The small Caribbean islands, gathered around Caricom, also criticize that their great ally, Venezuela, has not been invited to Los Angeles. Maduro has just forgiven a debt of 300 million dollars with four of them, in addition to promising that he will once again supply PetroCaribe with black gold.