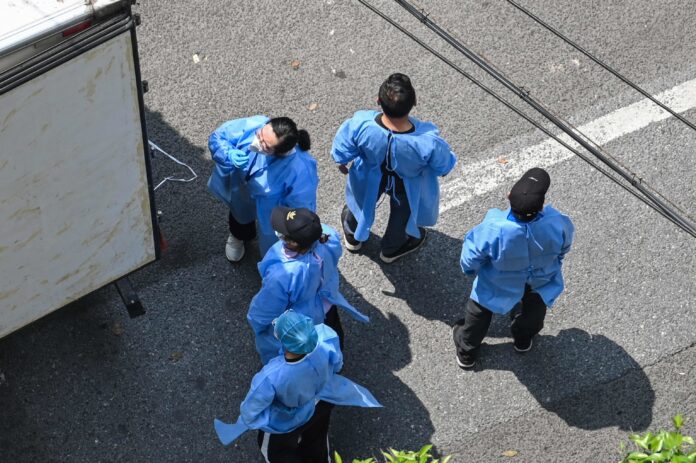 Back to normal. At least something close to it. The plea of ​​more than 25 million people who are locked up in their homes has finally been heard. Starting in June, Shanghai will reopen its doors, gradually, after more than six weeks under strict confinement.

From the peak of almost 28,000 daily infections to less than a thousand cases. That has led to reopening plans already having a date. It will not be all at once, but in phases. But the announcement by the authorities this Monday has filled, at least with illusion, the longing for fresh air in China’s financial capital.

“It’s great news, but I don’t trust it. Everything here changes from one moment to the next. I still remember when the city government began issuing statements in March denying the rumors that they were going to confine us, and three days later they did it,” says Asier, a Basque engineer who has been living in Shanghai for six years and will pack his bags back home as soon as the city opens.

“China has the right to continue with its strict zero Covid policy because it is true that they have saved many lives and if they relax it could be a massacre with such a large population, such a contagious variant of the virus and vaccines that do not protect as much. like those made in the West. But as soon as we can leave, there will be a flood of expatriates who will leave and never come back. It is very difficult to continue in these conditions if you have the option of being somewhere else. You don’t know what may happen tomorrow and many like me We haven’t left the country for three years,” says Asier.

More than 600,000 infections and more than 300 deaths in a city that before March had not reported more than 400 positives in two years and that boasted a more lenient approach than the strict policy of confinements and massive tests in the rest of the country, have led to Shanghai to a limit situation. There is more fear of ending up in one of the crowded quarantine centers if you test positive, than of the virus itself. And spirits remain low over food shortages as netizens and censors in Chinese cyberspace continue to play cat and mouse: some vent on social media by criticizing the situation, and others rush to delete comments. And so over and over again.

This Monday, at the same time that the latest data on the slowdown in China’s economic activity due to the closures were known, affected retail sales, industrial production and employment (China’s unemployment rate increased to 6.1% in April, the highest level since the peak of 6.2% seen in the early part of the pandemic in February 2020), Shanghai Deputy Mayor Zong Ming announced the relaxation of some movement restrictions from May 21 and an opening next month.

“From June 1 to the middle and end of June, as long as the risks of an uptick in infections are controlled, we will fully implement epidemic prevention and control, normalize management, and fully restore normal production and life.” in the city,” Zong said.

Supermarkets, some shops and malls will open next week. The airlines would increase domestic flights and the railway operator will do the same with trains. Public transport will also return for neighbors who show a negative PCR test in the last 48 hours.

This will be the slow restart of the economic heart of the Asian giant. Meanwhile, the political center, Beijing, is in its fourth week of a stealthy lockdown. People are not confined to their houses like in Shanghai, but outside of them they cannot do much either because practically everything is closed. The social life of a large part of the residents is limited to the queues for the PCR every 48 hours that have to be done. And it is not a long wait either because there are more testing stations on the streets than new daily infections.

Restaurants remain closed, although the food delivery service is operating normally. In districts affected by the virus, public transport was closed and people were asked to stay home. China’s capital, home to more than 21 million people, has reported (from April 22 to May 14) a total of 1,015 positive cases. All of them are admitted to two hospitals in the city, although the vast majority are asymptomatic, because national policy does not allow home quarantine.

This is the situation while Chinese leaders continue to defend their strategy to save lives, renamed at the beginning of the year as “Covid zero dynamic”, although it has little dynamic because a much tougher policy is being executed than when it all started in 2020 in Wuhan, in addition to continuing with the borders closed and expanding quarantines.