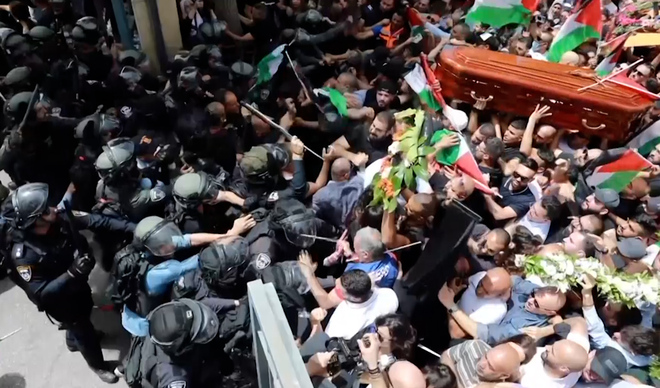 Thousands of Palestinians have participated in the funeral of the Al Jazeera journalist, Shireen Abu Akleh, marked by tension, indignation and some clashes with Israeli police in East Jerusalem. Meanwhile, Israel and the Palestinian National Authority (PNA) launch accusations around her death -and investigation of her- of her last Wednesday when she was covering a raid in Jenin. In this area of ​​​​the north of the West Bank, an agent of the anti-terrorist unit of the Israeli Police has died this Friday in new armed clashes with militants of the Islamic Jihad.

At the epicenter of the controversy, the investigation into the origin of the bullet that ended the life of the well-known and veteran reporter. While the Palestinian leadership, like Al Jazeera, accuses Israeli soldiers of what it calls “cold-blooded murder,” Israel says its initial military report cannot establish whether Abu Akleh was hit by any of its soldiers or by militants. during the exchange of fire in the Jenin refugee camp and regrets that the PNA has refused to cooperate in a joint investigation.

The tension of recent days resulted in clashes outside St Joseph’s Hospital in East Jerusalem where his body lay until his burial in East Jerusalem. Israeli policemen charged participants in the funeral procession who were carrying Palestinian flags with batons. Abu Akleh’s coffin nearly hit the ground. While the Palestinians denounced “the attack of the occupying agents” at the beginning of the funeral march, the Israeli Police affirms that before those moments “rioters began to throw stones at policemen from the square of the French hospital, and the policemen were forced to act out”.

For the thousands of Palestinians who have wanted to accompany one of their most admired journalists on her last journey to the Christian cemetery in Jerusalem, there is no doubt who was responsible for the death.