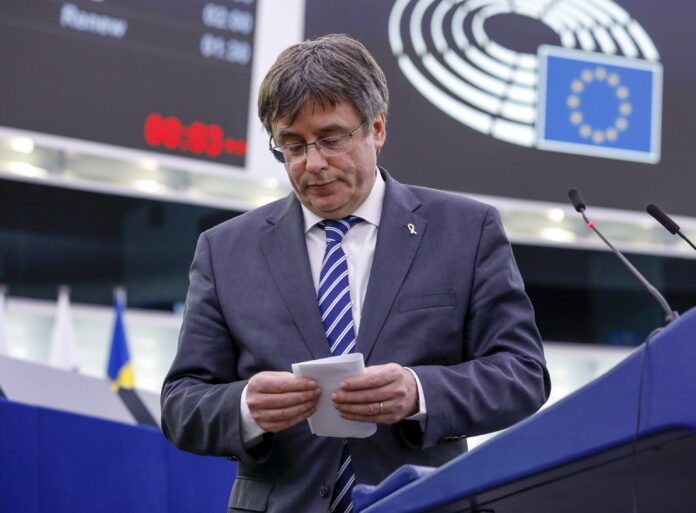 This Wednesday, in a very busy day in Brussels, the President of the European Parliament, Roberta Metsola, announced that 49 MEPs (26 who entered after Brexit and another 23 who have replaced vacant positions for all kinds of reasons) have received the light Green from the Committee on Legal Affairs to his credentials, a step that should have been done many months ago but had been put on hold by the pandemic. However, four names were missing from the list: Carles Puigdemont, Toni Comín, Clara Ponsatí and Jordi Solé.

The process, essential to confirm that the new deputies do not present incompatibilities, such as being members of another Parliament or being civil servants, was suspended in March 2020, since there was no way to solve the technical problems to guarantee the right to meetings in person or the secret vote electronically. With these aspects already resolved (in fact, last year it was already possible to process different requests that presented the same problems) the Commission has proceeded to analyze the pending files. And although it has formalized 49, it has not been able to complete those of the Catalan pro-independence politicians, because none of them have carried out the procedures stipulated by the Spanish authorities.

The European Parliament has verified the anomaly, but the next step corresponds to the national authorities. The chamber will ask the Central Electoral Board why it does not have that information and what its legislation says. With its response, Parliament will study the legal consequences and it will be up to the presidency to make a decision. There is nothing in the internal regulations that resolves the impasse, and in theory you can only be without credentials temporarily. The solution could be to ignore the problem, request an opinion from the legal services, go to the CJEU or hypothetically withdraw the record, although seeing the background and the question of the petition still pending judgment seems very unlikely.

Although, once again, the ‘Catalan issue’ has caused some deputies to be in a kind of limbo, this time it does not affect their day to day. His record, his prerogatives, or even his situation are not touched. There is an open consultation, but for two years it has been clear that they had not formalized the process and nothing happened. And it won’t happen anytime soon. But the skein that already affects half a dozen member states, courts of all kinds, lawyers, experts and political parties is a little more entangled.

The problem is one more of a huge list that has involved disputes at all levels in the house, reports from legal services, fights between two different presidents, political pressure, lawyers, hearings and a good number of appeals before the court of Justice. of the Union. The implications are not clear right now, because not all those involved are in the same situation. Solé could fix it in a few days if he wanted, because he has no problem with the courts. But the other three, claimed by Spain, have not set foot in the country since their departure, not even in their capacity as deputies. At the same time, the European Parliament is asking the Spanish authorities what they think, but all under the umbrella of the CJEU decision more than two years ago that opened the doors of Strasbourg to escapees despite the fact that the main parties were sure that It was not possible.

Each of them presents different cases. Puigdemont and Comín were elected after the European elections of May 2019, but they could not collect their seat until January 2020, just before the pandemic, after a decision by the EU Court of Justice, since they had not sworn in nor complied with the Constitution in person. Ponsatí, who lived in Scotland, entered the chamber thanks to Brexit, which involved the departure of British deputies, a reorganization of the plenary session and the granting of five more seats to Spain. Among them, by the way, that of Adrián Vázquez, from Ciudadanos, who also entered after the formalization of the British departure, at the end of January 2020, and who is now the president of that same Legal Affairs Committee and the one who has signed The report. Finally, Jordi Solé, who had already been a deputy in other legislatures, returned to Brussels and Strasbourg in July 2020 occupying the seat of Oriol Junqueras, who was never able to occupy it, after being sentenced in prison in Spain.

Neither of the last two formalized the process of swearing, abiding by or promising the Constitution, so the Spanish authorities did not send the formal notification to Parliament, but even so, President Sassoli did not object to them receiving the act, based on the principle of equal treatment. The rest of the Spanish that entered due to Brexit are on the ‘approved’ list. Vázquez himself, Marcos Ros, from the PSOE; Gabriel Mato, of the Popular Party. And Margarita de la Pisa, from Vox.

The credentials of newly elected MEPs are always checked to confirm that they do not hold a position incompatible with the seat. “Incompatible positions are membership in the Government or Parliament of a Member State of the Union, the European Commission, the Court of Justice, the Board of Directors of the European Central Bank, the Court of Auditors or the European Investment Bank”, says the institution in its regulations. “Active officials of institutions or bodies of the Union constituted by virtue of the Treaties of the Union to manage community funds cannot be deputies to the European Parliament either. It is a simple procedure, normally, but mandatory.

The process evokes the discussion that already took place at the time about the collection of the minutes, after Spain (and the chamber itself and its legal services) considered that in order to be a MEP it was necessary to comply with the national procedures, which in this case implied go in person to the offices in Spain and swear to the Constitution, something that neither Puigdemont nor Comín nor Ponsatí did. The Court of Justice of the EU agreed with them and stipulated that a person is an MEP from the moment the vote count ends, without the need for these procedures.

This situation is similar, but not the same. Parliament’s rules, however, start from this base and maintain that once the results of the elections are official, the Member States communicate the names of the people who have obtained a seat and the President asks the competent authorities in the Member States to take the necessary measures to avoid any incompatibility. “Before taking up their seats, the new Members whose election has been notified must declare in writing that they do not hold any office incompatible with that of a Member of the European Parliament. This declaration must be made no later than six days before the constitutive session of the European Parliament”, says the text. The credentials of the new deputies are subsequently verified by the Committee on Legal Affairs, which prepares a report. And the result is communicated to the president, Roberta Metsola now, who must inform the plenary, as it happened today.