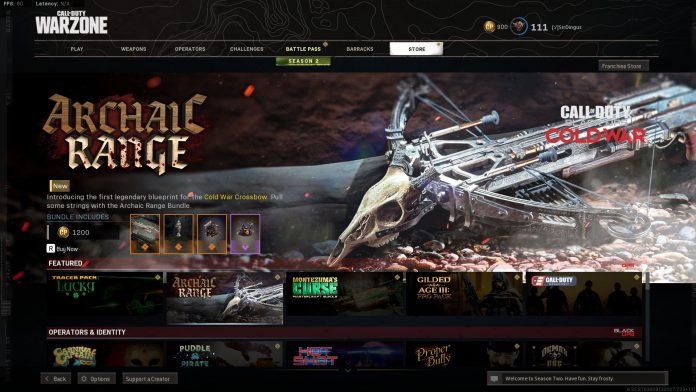 After a brand new crossbow in Call of Duty: Warzone and Black Ops Cold War went a little earlier than planed, publisher Activision has pulled the weapon out of both matches, and guaranteed refunds for those who dared out for the new weapon.

Only yesterday March 18, a package appeared in both in-game stores for Call of Duty: Warzone and Black Ops Cold War, containing the newest R1 Shadowhunter Crossbow design. The crossbow for a weapon is new to both Warzone and Black Ops Cold War, therefore players jumped at the opportunity to purchase the bundle for 1200 COD Points and unlock it straight away, though it was not actually useable in the battle royale game.

On the other hand, the package was released in error. Just a matter of hours following the R1 Shadowhunter Crossbow went live for both matches, the official Activision Support Twitter account released the statement below, notifying players they were pulling the weapon from both games immediately, and refunding players that the 1200 COD Points they had used.

At the moment, Activision has yet to reveal if the crossbow weapon will actually be released in Warzone or Dark Ops Cold War. When the weapon will eventually launch, nevertheless, all gathered progress toward levelling the weapon up and unlocking attachments for it’ll be fully reset, so everyone will have to start again from weapon degree .

Presumably, the official release of this crossbow for both games isn’t that far off. What is interesting is that, while the crossbow was available, it was really obtainable in Black Ops Cold War through an in-game struggle. To unlock the weapon, then you needed to get three’One Shot, One Kill’ medals using a weapon with no attachments in the game’s multiplayer mode. It’s just the R1 Shadowhunter Crossbow routine that had to be purchased with COD Points. When the crossbow does eventually arrive, this challenge is probably how we will unlock the weapon at Black Ops Cold War at the least.