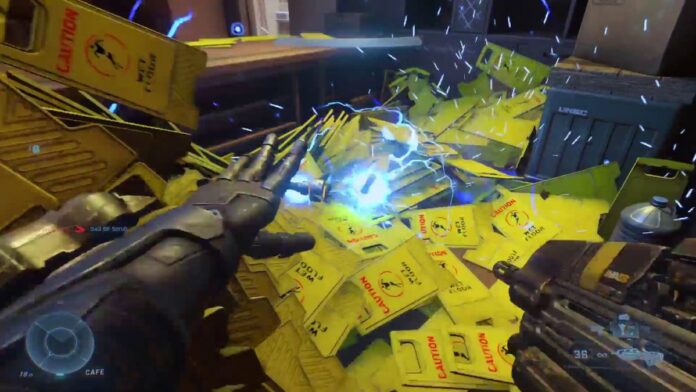 It wouldn’t be Halo without a few physics disasters.

You might have heard, but there’s a new Halo game coming out soon. That doesn’t happen very often! It’s nice to be excited about Halo again, in no small part because I’ve missed running around its erratic physics sandboxes. In Halo, gravity is a tool to be harnessed, but never mastered. No matter your intentions, your warthog will inevitably flip, a grenade will bounce to impossible heights to kill you, and the occasional bug will cause something absolutely absurd to happen.

Magical bugs have already started rolling in from the latest Halo Infinite technical test running this weekend. Behold, the self-duplicating wet floor sign (as shared by natdog805 on Reddit):

So many questions. Why does electrifying a wet floor sign produce more signs? Are they supposed to split but instead grow back like starfish? How many can you get to spawn in a single map? How many before the game crashes? Seems like a slippery slope, which explains the signs. Also where is this thing, because I wanna try.

I’ve posed these questions to 343 in the hopes for some answers (Halo’s community manager seems to be aware of it), but in the meantime, I’m enjoying the low-stakes mystery. A few other redditors have clipped their wet floor disasters and they all involve tossing one of Infinite’s new electric grenades at the sign, so maybe it’s the culprit? It does behave differently than every other throwable I’ve used so far in that it stays active for several seconds, decaying the shields of any player standing near it. The constant damage tick could be prompting the wet floor sign to explosively replicate.

Look, 343, I know an infinitely replicating prop is something of a performance liability, but please think twice before patching this one out completely. Not only is it a classically Halo bug, but it’s the first time I’ve understood why it’s called Infinite.

One bug that will definitely get the boot, incredibly funny as it is, would be the recently-discovered exploit that lets players rapidly spam melee attacks.