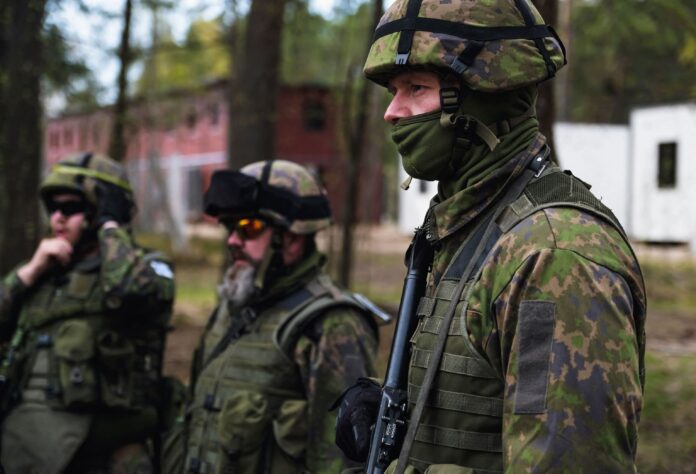 Although the Finnish army only has 13,000 professionals, this country of 5.5 million people has an impressive 900,000 reservists and a war army with a capacity of 280,000 soldiers. The symbol of a country that has always wanted to be prepared to face the worst.

For many on the military island of Santahamina this Saturday in May, the Russian invasion of Ukraine was a wake-up call.

“It was the last sign that you have to be prepared in life. That if something happens, you have to be more equipped for a crisis,” Ville Mukka, a 30-year-old engineer, told AFP.

Wearing camouflage gear and some wearing branch-covered helmets, he and his companions learn hand-to-hand combat, spotting explosives and coordinated movement through the woods.

In the first week of the war in Ukraine, enrollments in volunteer defense programs skyrocketed.

“The interest is about ten times higher than in normal years,” says Ossi Hietala, 29, a representative of MPK, the Finnish National Defense Training Association.

Instead of 600 volunteers per week, the number of volunteers skyrocketed to 6,000, prompting the Finnish state to pay the MPK an additional three million euros.

Independent from Russia since 1917 and invaded by the Soviet Union in 1939, Finland was at war with its powerful neighbor for most of World War II, ending in a de facto alliance with Nazi Germany.

The conflict led to the loss of much of its territory and then decades of enforced neutrality under Moscow’s gaze during the Cold War.

“You don’t have to go back too far in history to find points of convergence” with the Ukraine war, “which is quite worrying,” says Tuomas Vare, another 43-year-old participant.

“That’s probably why I’m more active in my training,” he says.

Finland on Sunday and Sweden on Monday announced their “historic” entry into NATO as a direct consequence of Russia’s invasion of Ukraine, thus turning the page on decades of military non-alignment.

Since the start of the Ukrainian conflict, Finland has seen the number of supporters of the alliance triple in just a few months, reaching over 75%.

“I think that Finland, as a small country, has no other reasonable way to defend itself and its sovereignty. I am in favor of the alliance,” says Ville Mukka.

The MPK training courses, which offer a wide range of courses to prepare citizens for crises, serve 40,000 people a year.

Courses range from basic map reading and camping in the woods to sniper training and anti-tank weapons.

“Those who come are ordinary Finns. These people want to come to develop their skills, train and learn new things,” says Ossi Hietala.

Most of the participants are reservists who have come to refresh their knowledge.

Unlike most European countries, Finland bases its defense on compulsory military service.

All men between the ages of 18 and 60 are subject to conscription, while women are recruited on a voluntary basis.

Each year, more than 20,000 young recruits serve from six months to nearly a year. After that, they join the reserves.

“Reservists make up 96% of the forces in wartime, so they are a very important part of the Finnish military defence,” says Hietala.

“A very important part of the adult population has had military training at some point in their lives,” he stresses.