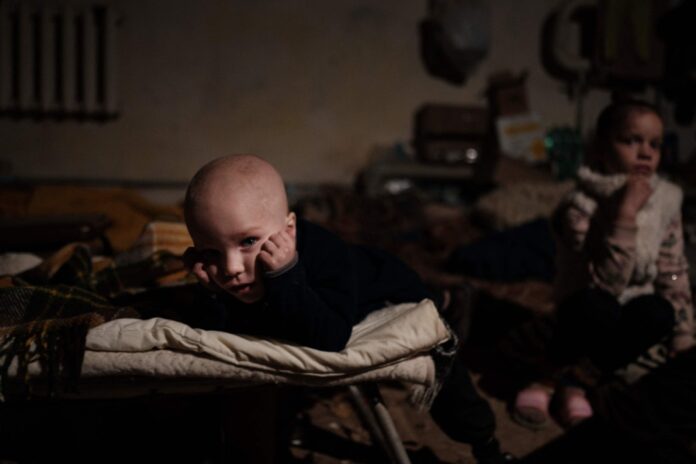 “Do you understand that this is a war zone?” A policeman dressed in military uniform and combat helmet despairs while a young woman with a fixed gaze refuses to be evacuated along with her two children from the Ukrainian city of Lysychansk, near the front. Shortly before, shells were falling again on some buildings in the industrial city, destroyed by the war.

Exasperated policeman Viktor Levshenko points to the sky and tries to convince Angelina Abakumova to get into an armored van. The vehicle is to take them to a slightly safer corner of the Ukraine, past Russian artillery positions.

“Seriously, tell me what you’re doing here with the kids,” asks the professional athlete turned regional traffic police chief. “Do you understand that this is a war zone?” he insists, apparently annoyed.

The 30-year-old woman nods silently and stands her ground. But Levshenko keeps insisting and tells her that she could die with her children. Her presence, he says, is undermining Ukraine’s effort, as the army has to focus on civilians instead of fighting the Russians.

Faced with the woman’s insistence, he leaves. “We’ll be back tomorrow and I hope to see her ready with your things. These children have to be evacuated to a safe place,” she tells him.

“I won’t change my mind,” Abakumova whispers, as she returns to the shelter. “Now the danger is here. Then you leave and the danger goes somewhere else. What’s the point of going back and forth?” he wonders.

Like Abakumova, some civilians in eastern Ukraine are choosing to stay in their homes, amid relentless shelling by Russian forces and waiting for the war to end.

Reasons for staying include lack of money to start a new life and fear of losing their homes. But these justifications do not satisfy Levchenko. “I think people don’t fully understand the situation,” he says, after meeting the young mother.

“We have to avoid the bombing and make our way through very difficult conditions to get to these people and feed them and try to evacuate them,” he explains. “The people here think everything is going to be okay,” she says, referring to the dozens of people hiding in the underground corridors and interlocking cellars of one of the city’s buildings.

“But unfortunately, it’s not right,” continues the 33-year-old.

Volunteers distributing food at shelters estimate that of Lysychansk’s 100,000 residents, 20,000 are still trying to survive in the besieged city. There is no electricity or phone signal. The water supply has been cut off since April and it is expected that the gas tap will be closed in the next few days.

Civilians still walking the city streets seem almost oblivious to the escalating rocket and artillery fire from Russian units trying to cut off this mining area from the rest of Ukraine.

When retiree Volodimir Dobrorez woke up this morning, he counted more than 30 artillery hits near a bridge leading to Severodonetsk, a neighboring city now under partial Russian control. “The last three days have been especially bad,” says the 61-year-old.

Many of those who remain understand, however, that their lives will never be the same as before the Russian invasion on February 24. Abakumova assures that she has weighed the fate of her children with that of her husband and her brother.

“The evacuees of fighting age are immediately called up and sent to the front like cannon fodder,” he says, as his son and daughter play on the floor of the bunker. “I will not let my husband and his brother go. They would die the first day,” she concludes.