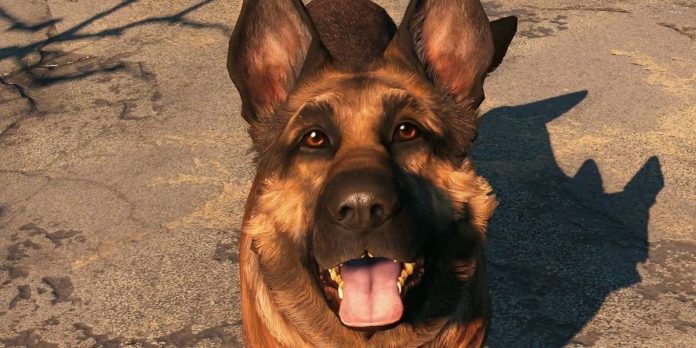 Joel Burgess, a developer, paid tribute to his loyal companion via a Twitter thread.

River, the dog that served as both a model and inspiration for Fallout 4’s Dogmeat, has passed away. River’s owner was developer Joel Burgess. He posted the news on Twitter. He also discussed River’s role in Fallout 4’s development, as an ongoing presence for the team to learn about a dog companion. River was also recorded and her behavior was observed to help Dogmeat.

Burgess discusses how River influenced his desire for a Fallout 4 dog companion to be more than just a weapon. Burgess wanted to bring the personality of a loving, protective and outgoing dog into Fallout 4. So River’s lookss, movements but most importantly, personality, were reflected in the character’s in-game avatar. River was the inspiration for Dogmeat’s tendency to give you large items, even those you don’t want.

River loved to make people happy… sometimes she brought us large objects. Burgess said that although her intentions were good, her judgment wasn’t always perfect. She was accompanied by a photo of River carrying large logs.

Dogmeat was inspired by Jean Simonet’s walk. River would walk ahead of Burgess but stop often to check on him.

River’s game behavior is also based upon the behavior of German Shephards. These protective dogs will place themselves between what they want to protect or danger. Dogmeat does exactly that. Burgess stated that this gave Dogmeat an exclusive combat style, which was different from other companion NPCs. It was also a character choice.

It is never easy to lose a friend. Joel Burgess and all who knew River are our deepest sympathies. Today, raise a glass in River’s honor. At the very least, Dogmeat can bring people joy for many years to come.