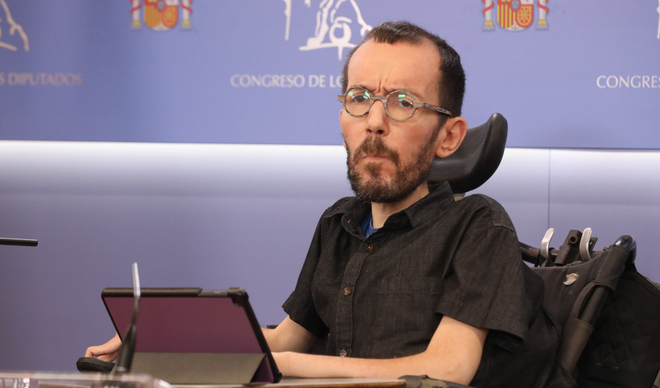 The foreseeable return of Juan Carlos I to Spain is already being paved by Pedro Sánchez’s parliamentary allies and by his minor partner in the coalition government with a cataract of insults that transcend the figure of the Emeritus and already reach the very institution of the Crown.

The former head of state is dedicated from these formations the adjectives “thief”, “corrupt”, “scoundrel” and “cheeky”. They reproach him for his willingness to return to the country “on vacation”, “to participate in a regatta” and “eat well” while “laughing at the Spaniards”, and they demand, from him and the monarchy, “explanations of all the money that they have received and from which they have taken”.

United We Can expand the focus to question the Constitution of 78 that establishes the parliamentary monarchy as a form of the State and, in addition, establishes the inviolability of the King. For the purple formation, as his spokesperson in Congress, Pablo Echenique, has affirmed, for whom what the fundamental law does is consecrate “a monarchical institution designed to commit crimes with impunity.”

For UP, this represents “a very serious problem for democracy” because, ultimately, “it allows the Monarchy to commit crimes and not be prosecuted.” For this party, the “corrupt activities” of the monarchy, although they have not received judicial reproach, “they do have a social one” and therefore they predict that “the republic is getting closer.” The purples do not harbor any hope that the Emeritus is going to give the Spanish any explanation.

Compromís insists that “there is an unbearable rotten smell, so fetid that it can endanger democracy.” For his deputy, Joan Baldoví, the King Emeritus “is not untrained in having such a hard face” and finds it surprising that the right “attempts to whitewash a scoundrel.” Compromís demands that the Monarchy “give explanations for all the money it has received and that it has taken away.”

Miriam Nogueras, spokesperson for JxCat, has not hesitated to describe Juan Carlos I as a “thief” and has criticized the fact that he can return to Spain without problems “while a rapper (in reference to José Miguel Arenas, Valtònyc) is being persecuted precisely for denounce the thief or the former president of the Generalitat Carles Puigdemont must remain in exile”.

For the CUP, the visit of the Emeritus “would be a joke if it were not a scandal.” This formation blames the PSOE for having refused on several occasions to address the inviolability of the King or to create parliamentary investigation commissions on the monarchy. For the CUP, there is no doubt that “the state of corruption remains.”

Aitor Esteban, on behalf of the PNV, considers that the problem surrounding Juan Carlos I is “his image, all his activity, his gestures and behavior and where his fortune comes from.” For the Basque nationalist deputy, “shame will accompany him throughout his life.”

Íñigo Errejón, from Más País, believes that the Emeritus “has lost respect for all the Spaniards who have supported him until now.” For the deputy, “his crimes have not been prosecuted because they are protected by inviolability” and this would be an “extraordinary” moment to regulate this constitutional provision “beyond the fact that the Head of State behaves well or as a scoundrel.” Errejón has expressed his “surprise” that in the King’s House there is no one who has advised Juan Carlos I “a bit of decorum.”

Bildu, for his part, has no doubt that the Emeritus’s trip to Spain is “a laundering operation”, but he warns that with it “the irregularities he has committed will not be covered up”. His representative in Congress, Mertxe Aizpurua, has described the return of the former head of state as “a real show in every way”. She has also emphasized that “perpetual inviolability must be reviewed and regulated” because “both the King Emeritus and the current one live in impunity.”