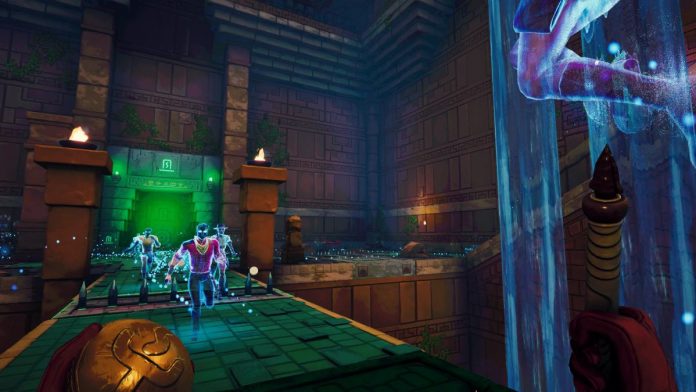 Phantom Abyss is a first-person roguelike about researching randomised temples laden with traps and bottomless chasms. The whip wielding protagonist is fast and agile but not especially violent: Their job is to retrieve sacred relics, as far as I can tell there’s no battle in Phantom Abyss. The whip can be utilized as a kind of grappling hook, or else to trigger switches, but you won’t be slaying bats with it. Tonally, it sits somewhere between Spelunky and Indiana Jones, with a touch of Fall Guys in its barrier course-style progression.

In a nice touch, during every run you’re going to be accompanied by the ghosts of up to 20 other gamers, who you can either ignore or follow–performing the latter might help you avoid a hidden trap, or direct you to an update you could otherwise have missed. It works rather like the ghosts in Dark Souls games, just you will be able to chase Phantom Abyss’s ghosts from the start of the run all the way to their death.

As you’d expect, the deeper into the temple that the better the rewards. There are different unlockable whips to obtain, in addition to some neat-sounding traversal skills: you are able to unlock double jump, an Apex Legends-style extended slide, and a slide jump among other things. To put it differently, it’s a roguelike, but that which sets Phantom Abyss aside, so far as I could tell after watching a flow, is that its first-person platforming is moreishly fluid–believe Titanfall two by way of Mirror’s Edge.

Phantom Abyss is in development at Brisbane-based studio Team Wiby, and released by Devolver Digital. It strikes Early Access next month a time, where it’ll remain for”at least a year” while the match gets fresh rooms, traps, whips and zones, as well as some other features.